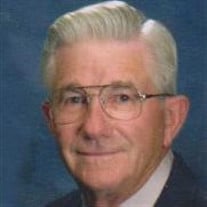 Lenus Schulte, age 94, of Carroll, died Monday, July 3, 2017 at St. Anthony Nursing Home in Carroll. Mass of the Christian Burial will be celebrated at 11 a.m. Friday, July 7, 2017 at St. Lawrence Catholic Church in Carroll. The celebrant will be Fr. Timothy Schott. Music will be by Kate Cuddy and the St. Lawrence Choir. Lectors will be Emily Berigan, and Anna Schulte. Gift Bearers will be Bonnie Schulte, Phillis Schulte, and Gary Kropf. Eucharistic Ministers will be Jean Knobbe, Pat Lenaghan, and Cathy Potthoff. Casket Bearers will be Lenus’ grandchildren. Burial will be at Mt. Olivet Cemetery in Carroll with military honors conducted by the Breda American Legion. Friends may call at the Sharp Funeral Home in Carroll after 5 p.m. on Thursday, where there will be a Christian Wake Service held at 6:30 p.m. The casket will be moved to St. Lawrence Church on Friday morning where visitation will resume at 10 a.m., and continue until the time of the funeral mass. Memorials may be left at the funeral home, or at the church to be directed to the St. Anthony Hospice of Carroll. Funeral arrangements are under the direction of the Sharp Funeral Home in Carroll, and online condolences may be left for Lenus’ family at www.sharpfuneral.com. Born on April 2, 1923 near Breda, Iowa, Lenus was the son of Henry and Anna (Tegels) Schulte. He grew up near Breda, and attended country school. Lenus then went on to attend The National School of Aeronautics in Kansas City, Missouri. On December 9, 1942 Lenus enlisted in the United States Army Air Force. He proudly served his country during World War II, and was stationed at Keflavik Naval Air Station in Reykjavik Iceland with the Transportation Air Command. He was honorably discharged on February 11, 1946, and returned to the Auburn area to begin farming. On September 1, 1952 Lenus was united in marriage to Mary Ann Ellerbrock at St. Mary’s Catholic Church in Auburn. The couple made their home near Auburn, where Lenus continued to farm. The couple later retired to the Carroll community in 1984. Lenus was very talented. He enjoyed working with stained glass; some of his windows are located at the St. Anthony Hospital Chapel, and St. Lawrence Church. Lenus also enjoyed golf, traveling, history, photography, and regularly swam at the Carroll Recreation Center. He appreciated growing orchids, and was an avid reader. Lenus was a member of the Breda American Legion, and St. Lawrence Catholic Church in Carroll. Left to celebrate Lenus’ life is his wife: Mary Ann Schulte of Carroll; children: Tim Schulte and his wife Phillis of Carroll, and Bob Schulte and his wife Bonnie of Omaha, NE; a son-in-law Gary Kropf and his wife Pat of Omaha, NE; nine grandchildren: Katie (Matt) Zelle, Tom (Rebecca) Kropf, Scott (Christal) Schulte, Mark (Alexa) Schulte, Matt (Giulia) Schulte, Steven Schulte, Emily (Conor) Berigan, R.J. Schulte, and Anna Schulte; one great-granddaughter: June Schulte; his sister: Donita Schrad of Lake City; and sister-in-law: Opal Schulte of Lake View, as well as many nieces, nephews, and other extended relatives. Lenus was preceded in death by his daughter, Suzanne Kropf, his parents, Henry and Anna Schulte, his siblings: LeRoy Schulte, Lloyd Schulte, and Ione Kluver.

The family of Lenus Schulte created this Life Tributes page to make it easy to share your memories.

Send flowers to the Schulte family.