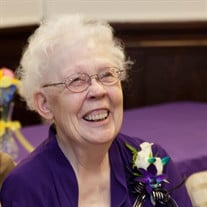 SERVICE UPDATE: Due to the recent rise in the Delta strand of COVID-19, all public services for Lenore Gehling have been cancelled. The family will have a private service at the Sharp Funeral Home in Carroll on Wednesday, July 28. Burial will follow at the St. Francis Cemetery in Maple River. Flowers may still be sent, and memorials may still be directed to the Israel Family Hospice House in Ames, Iowa, but no public service will be held at this time. The service can be viewed as a live-stream or as a recording at the following link: https://youtu.be/gan6gP8ao5o Lenore Gehling, age 82, formerly of the Carroll area, died Friday, July 23, 2021, at Israel Hospice House in Ames, Iowa. Funeral arrangements are under the direction of the Sharp Funeral Home in Carroll, and online condolences can be left for Lenore’s family at www.sharpfuneral.com. Lenore, the daughter of Roy and Agnes (Leiting) Lemker was born on April 27, 1939, in Carroll County, Iowa. She grew up near Maple River. In her early years she graduated from Kuemper Catholic High School, and worked in the diabetic kitchen at St. Anthony Regional Hospital. On May 25, 1963, Lenore was united in marriage to Raymond Gehling at St. Francis Catholic Church in Maple River. Lenore was a devoted homemaker, raising, and caring for their ten children. She enjoyed reading, gardening, and fishing. Most of all she enjoyed watching car races and rodeo events, either in person or on television. In her later years, as Lenore’s health declined, she moved closer to her family in Elkhart. Lenore is survived by her children: Gary (Dawn) Gehling of State Center, Suzanne (John) Boris of Gaylord, MI, Sandra (Michael) Luster of Rochester, MN; Nancy (Eugene) Mevissen of St. Croix Falls, WI, Daryl Gehling of Granger, Stephen (Brenda) Gehling of Polk City, Mark (Amanda) Gehling of Iowa Falls, Scott (Rachel) Gehling of Elkhart, and Becky Gehling of Story City; 19 grandchildren; 6 great-grandchildren. Also surviving are her siblings: Alan (Nancy) Lemker of Breda, Mary Jo Cooke of Las Vegas, NV, and Dave (Norma) Lemker of Windsor Heights; her sisters-in-law and brothers-in-law: Marceal (John) Wittry of Breda, Larry (MaryLou) Gehling of Westside; William Gehling, Jr. of Carroll, Phil (Jayne) Gehling of Westside, and Eileen Gehling of Wall Lake, as well as many nieces, nephews, and other extended relatives. Lenore was preceded in death by her parents; her husband Raymond in 1994, son- Michael Gehling in 2012; her brothers-in-law and sisters-in-law: Doug Cooke, Arthur Gehling, David Gehling, Alitta (Harold) Lansink, Janet Gehling, and Dorothy (Louis) Hoffman.

SERVICE UPDATE: Due to the recent rise in the Delta strand of COVID-19, all public services for Lenore Gehling have been cancelled. The family will have a private service at the Sharp Funeral Home in Carroll on Wednesday, July 28. Burial will... View Obituary & Service Information

The family of Lenore Gehling created this Life Tributes page to make it easy to share your memories.

Due to the recent rise in the Delta strand of...