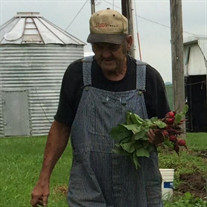 Lawrence F. Thelen, age 82 of Carroll and formerly of Vail, passed away peacefully surrounded by family on Saturday, February 9, 2019, at St. Anthony’s Hospital in Carroll. Mass of Christian Burial will be celebrated at 10:30 a.m. on Wednesday, February 13, at St. John Paul II Parish—Holy Spirit Church in Carroll. The Celebrant will be Fr. Kevin Richter. Mass Server will be Jack Ulveling. Music will be directed by Dr. Franklyn Busby and the Holy Spirit Resurrection Choir. Lectors for the funeral mass will be Renee Ernst, Meriah Thelen, and Anna Houston. Gift Bearers will be Mallory Kanne and Ethan Kanne. Eucharistic Minister will be Joe Thelen. Pallbearers will be Joshua Padget, Dustin Padget, Adam Vollstedt, Evan Thelen, Greg Sporrer, Alex Sporrer, Allen Waterbury, and Zachary Waterbury. Honorary Pallbearers: Elizabeth Trost, Krista Sporrer, Renee Ernst, Ashley Padget, Katie Cornelius, Meriah Thelen, Rebecca Sporrer, Megan Clayton, Gina Vollstedt, Rebecca Houston, Anna Houston, Mallory Kanne, and Ethan Kanne. Interment will be in the St. Ann’s Cemetery in Vail at 1 p.m. on Wednesday. Friends may call at Holy Spirit Church after 4 p.m. on Tuesday where there will be a rosary at 5 p.m. and a Christian Wake Service at 7 p.m. Additional visitation will be from 9:30-10:15 a.m. on Wednesday at the church. In lieu of flowers memorials may be left for St. Anthony Hospice or Kuemper Catholic Schools Foundation. Funeral arrangements are under the direction of the Sharp Funeral Home in Carroll and online condolences may be left for the Thelen family at www.sharpfuneral.com. Lawrence was born on January 7, 1937, to Sylvester and Mathilda (Neuerburg) Thelen on the family’s farm located seven miles north of Carroll. He was the eleventh of fourteen children that included five daughters and nine sons. He attended Our Lady of Mt. Carmel Catholic School and graduated in 1956. After graduation he learned the art of terrazzo flooring from Charlie Witt of Davenport—a trade he continued until 1964. He went on to work as a maintenance man for several companies, including IBP, Dubuque Packing Company, and General Electric—for whom he worked twenty years until his retirement in 1996. In addition to his full-time employment, he was also a farmer with both animal and crop operations. Maintaining mechanical equipment, buildings, motors, and machines allowed him to display some of his greatest strengths of resourcefulness, problem-solving, perseverance, and creativity, as well as his skills as a carpenter and electrician. His wife and children played major roles in the farming operation, and members of his family continue that work to this day. On September 7, 1959, Lawrence was united in marriage to the love of his life Cecelia Ann Gallagher at St. Ann’s Church in Vail. They prayed for a large family and were blessed with 10 children that included seven daughters and three sons. They are proud that all ten children graduated from Kuemper Catholic High School. Lawrence & Cecelia lived most of their 59 years together on their farm southeast of Vail and spent the last year together in their new home in Carroll. Supporting pastors, schools, and the church were very important to him. His dog, Sully, had been his very close companion for the last several years. He loved playing games with family, and he loved it most when he won…which was often. Lawrence was a charter member of the Sioux City Diocese Bishop's Circle. He is survived by his wife Cecelia of Carroll; his children John (Peggy) Thelen of Charter Oak, Carolyn (Lyle) Sporrer of Manning, Sharon (Randy Schechinger) Thelen of Manilla, Karen (Kent) Vollstedt of Manning, Nancy (Monty) Padget of Ankeny, Janelle (Sam) Houston of Byron, MN, Mary Ann (Jeff) Waterbury of Ogden, Sheila (Curt) Kanne of Indianola, and Paul Thelen of Riverside; his 21 grandchildren; and his 18 great-grandchildren with one more expected this summer. He is also survived by his siblings Sylvester Jr. (Kay) Thelen, Ralph Thelen, Mary Ann Ludwig, Lynette (Mike) Schaffer; his brothers-in-law and sisters-in-law Florence Thelen, Kay Thelen, Jean Thelen, Cornelius (Carol) Gallagher, Damian Gallagher, Larry Nagl, Mary (Russ) Wulf, Patty (Mike) Pudenz, Phyllis Poggensee, Geri (Kevin) Ricke, and Therese (Mark) Smiley; his Godchildren Lawrence Hoffmann and Paul Siegner; as well as many cousins, nieces, and nephews. He is preceded in death by his parents; his father-in-law and mother-in-law Lawrence and Dette Gallagher; his son Philip; his siblings Victor, Dorothy, & Melvin as infants and Linda (John) Hoffmann, Gerald Thelen, Marcile (Alfred) Hoffman, Norman (Marlene) Thelen, Eugene Thelen, and Norbert Thelen; his sisters-in-law Donna Thelen and Margie Nagl; his brother-in-law Allen Ludwig; and his Godchild Dale Lilleholm.

Lawrence F. Thelen, age 82 of Carroll and formerly of Vail, passed away peacefully surrounded by family on Saturday, February 9, 2019, at St. Anthony&#8217;s Hospital in Carroll. Mass of Christian Burial will be celebrated at 10:30 a.m. on... View Obituary & Service Information

The family of Lawrence Thelen created this Life Tributes page to make it easy to share your memories.

Send flowers to the Thelen family.