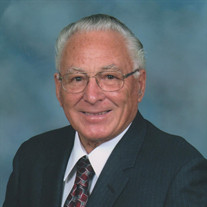 Lawrence Steffes, age 89, of Carroll, died Friday, November 17, 2017, at St. Anthony Nursing Home in Carroll. Mass of the Christian Burial will be celebrated at 10:30 a.m. Wednesday, November 22, 2017 at St. Lawrence Catholic Church in Carroll. The Celebrant will be Fr. Brian Feller. Con-Celebrant will be Fr. Timothy Schott. Music will be by Kate Cuddy, Kathleen Macke and the St. Lawrence Choir. Mass Servers will be: Vanessa Foley, Brooklyn Foley, and Tristen Foley. Lectors for the funeral mass will be: Diane Hannasch and Donna Bachman. Gift Bearers will be: Kennedey Reiling, Caleb Reiling, Makayla Britcher, Emma Britcher, and Cecilia Bowers. Eucharistic Ministers will be: Larry Reiling, Vicki Reiling, and Kelly Foley. Honorary Casket Bearers will be: Michele Rudisill, Danielle Dehne, Amanda Dehne, Jessica Bowers, Alycia Marsh, and Dawn Ketchum. Casket Bearers will be: Denny Steffes, Joseph Reiling, Nicholas Reiling, Austin Steffes, Zachary Ahrens, and Joshua Ahrens. Burial will be in Mt. Olivet Cemetery in Carroll. Friends may call at the Sharp Funeral Home in Carroll after 4 p.m. on Tuesday where there will be a rosary at 5 p.m. and a Christian Wake Service at 6:30 p.m. The casket will be moved to St. Lawrence Church on Wednesday morning where visitation will resume at 9:30 a.m. and will continue until time of the funeral mass. Memorials may be left at the funeral home or the church for St. Anthony Memory Care Unit. Funeral arrangements are under the direction of the Sharp Funeral Home in Carroll and online condolences may be left for Lawrence's family at www.sharpfuneral.com. Lawrence Henry Steffes was born on January 14, 1928 near Roselle, Iowa. He was the son of Joseph and Josephine (Haberl) Steffes. Lawrence spent his younger years in the Roselle area and attended Holy Angels School. On January 22, 1952, Lawrence was united in marriage to Darlene Irlbeck at St. John’s Catholic Church in Arcadia. The couple lived near Roselle, Mt. Carmel and later moved to Carroll in 1960. Lawrence was a farmer, gravel hauler, worked for Highway Surfacers, and also worked at Farmland Foods in Denison for over 30 years & he never missed a day. He enjoyed fishing, riding motorcycles, horses, baseball, playing cards, country music, and had a passion for doing yardwork. He thoroughly enjoyed taking his grandchildren for drives around Swan Lake. His greatest joy was spending time with his wife “Leaner” and his entire family. Lawrence was a member of St. Lawrence Church in Carroll. Steffy is survived by his children: Pamela Dehne and her husband Ernst Jr. of Ames, Vicki Reiling and her husband Larry of Carroll, Shelley Ahrens and her husband Dominic of Carroll, and Denny Steffes and his wife Lisa of Manning; 11 grandchildren; 15 great-grandchildren; his sisters: Florence Kokenge of Carroll, Bernice Irlmeier of Templeton, and Coletta (Leo) Wernimont of Fonda; his sisters-in-law: Dixie Steffes of New Hampton, Mary Irlbeck of Carroll, and Cindy Irlbeck of Carroll; his brothers-in-law: Virgil (Roe) Irlbeck of Maple River, and Kenneth Foley of Carroll; as well as many nieces, nephews, other extended relatives and many friends. Steffy was preceded in death by his parents, Joseph and Josephine Steffes; his wife of 52 years, Darlene; his parents-in-law, Leo and Marie (Soyer) Irlbeck; his brother, Norbert Steffes; his sisters: Hilda Schroeder, Lucille (Bay) Galloway, Irene (Leo) Ertz, Elizabeth (Florian) Wittrock; his brothers-in-law: Lawrence Kokenge, Herb Irlmeier, Al Irlbeck, Vince Irlbeck, Denny Irlbeck, and Leon Irlbeck; and his sisters-in-law: Rosemary (Francis) Roth, Virgine Irlbeck, and Marilyn “Tots” Foley.

The family of Lawrence Steffes created this Life Tributes page to make it easy to share your memories.

Send flowers to the Steffes family.