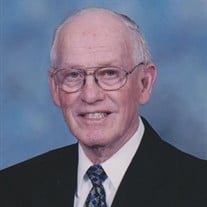 Lawrence Lampe, age 98, of Carroll, died Wednesday, October 31, 2018 at St. Anthony Nursing Home in Carroll. Mass of the Christian Burial will be celebrated at 10:30 a.m. Monday, November 5, 2018 at St. John Paul II Parish – Holy Spirit Church in Carroll. The Celebrant will be Fr. Brian Feller. Music will be by Franklyn Busby and the Holy Spirit Choir. Lecter for the funeral mass will be Peg Scheidt. Gift Bearers will be: Eric Staples, Trista Kalkhoff, and Peyton Staples. Eucharistic Ministers will be John and Diane Staples. Casket Bearers will be: Eric Staples, James Lampe, Jake Kalkhoff, John Staples, Loren Boyce and Greg Hacker. Burial will be in Mt. Olivet Cemetery in Carroll with military honors conducted by the Carroll American Legion. Friends may call at the Sharp Funeral Home in Carroll after 3 p.m. on Sunday where there will be a rosary at 4 p.m. by the Carroll Knights of Columbus and a Christian Wake Service at 5 p.m. The casket will be moved to Holy Spirit Church on Monday morning where additional visitation will be held from 9:30-10:15 a.m. Funeral arrangements are under the direction of the Sharp Funeral Home in Carroll and online condolences may be left at www.sharpfuneral.com. Born on December 25, 1919 at Manning, Iowa, Lawrence was the son of William and Theresa (Meyer) Lampe. He attended St. Joseph’s Grade School and later graduated from Carroll High School in 1938. Following his formal education, Lawrence went into partnership with Lou Heider in the motor freight business, Bell Transfer and Storage. In 1941, Lawrence was drafted into the United States Army. He served 4 years in Panama and Galapagos Islands and then returned to Carroll. On October 30, 1951, Lawrence was united in marriage to Ethel Boyce at St. Joseph’s Catholic Church in Carroll. The couple made their home in Carroll and upon the passing of Mr. Heider, Lawrence became sole owner of Bell Transfer and Storage until his retirement in 1986. He enjoyed tending to his garden, woodworking, and was known as the jack of all trades with the ability to fix or build anything. His greatest joy was his family; especially being involved in his grandchildren and great-grandchildren’s lives. Lawrence was active with the Carroll American Legion, Carroll VFW, Carroll Knights of Columbus and Holy Spirit Church. Lawrence is survived by his children: Pat Staples and her husband Gary of Carroll and Mike Lampe and his wife Kathy of Carroll; his grandchildren: Eric (Tasha) Staples, Trista (Jake) Kalkhoff, Josh Lampe, James (Ashley) Lampe, and Christina Lampe; his great-grandchildren: Shelby, Maddie, Peyton, Alayna, Rikki, Elijah, Carter, and Charlie; as well as other extended relatives. Lawrence was preceded in death by his mother; his wife Ethel in 2013; and his brothers-in-law and sister-in-law: James Boyce and Lawrence (Geneva) Boyce.

The family of Lawrence Lampe created this Life Tributes page to make it easy to share your memories.

Send flowers to the Lampe family.