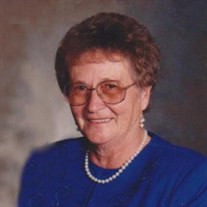 A link to LaVerne's Funeral Mass Recording can be found here: https://youtu.be/GeMZnEEshcA LaVerne Wittrock, age 96, of Halbur, died Friday, April 23, 2021, at Swan Place Assisted Living in Carroll. A Private Mass of Christian Burial will be celebrated on Tuesday, April 27, 2021 at St. Augustine Catholic Church in Halbur. The celebrant will be Fr. Steven Brodersen with Fr. Timothy Schott as concelebrant. Music will be by Julie Sibbel and Sherry Loughran. Lector will be Jake Wittrock. Casket bearers will be LaVerne’s grandsons: Luke Wittrock, Josh Wittrock, Zachary Wolf, Jason Wittrock, Tyson Wittrock, Justin Wittrock, Josh Sanders, Eric Wittrock and Levi Wittrock. A public graveside service will be held at 11:15 a.m. in St. Augustine Cemetery with military honors conducted by the Arcadia American Legion. A recording of LaVerne’s Funeral Mass will be available after the service on the Sharp Funeral Home-Carroll YouTube page at https://www.youtube.com/channel/UCqd2eeRJk5RTdEJoEooUoAQ. Please allow up to 72 hours for this service link to be available. In lieu of flowers memorials may be directed to the St. Anthony Regional Hospital Cancer Center in Carroll. Those wishing to mail a memorial may direct it to the LaVerne Wittrock Family, C/O Sharp Funeral Home, 226 W. 8th Street, Carroll, IA 51401. Funeral arrangements are under the guidance of the Sharp Funeral Home in Carroll, and online condolences may be left for LaVerne’s family at www.sharpfuneral.com. Born April 25, 1924 she was the daughter of Herman and Laura (Wiebers) Meyer of Manning. She was a 1942 graduate of Manning High School. She taught country school for one year, and worked at Boeing Aircraft factory in Seattle during World War II. LaVerne joined the Navy and served at a hospital in Georgia as a Hospital Apprentice 1st Class, receiving an Honorable Discharge. LaVerne married Walter H. Wittrock on February 11, 1947 with Father Kramer officiating. It was as double wedding with Norbert and Bertilla (Wittrock) Rohe. The couple resided and raised their family in Halbur for most of their years together. LaVerne loved to travel and study maps, and was an avid card player. She was loving and loyal to her husband, her family and her faith, and proved her heart of gold. She was a homemaker until her children were out of school, and then worked at St. Anthony Regional Hospital as a ward secretary for thirteen years until her retirement. LaVerne was a member of the St. Augustine Guild, Arcadia American Legion, and a 50-year member of the Catholic Daughters of America. Survivors include her children: Marvin (Barb) Wittrock of Boone, Steven (Cheryl) Wittrock of Portland, OR, Judy Wolf of Overland Park, KS, Dave (Lynn) Wittrock of Carroll, Kevin (Sandy) Wittrock of Burnsville, MN, Joel (Jean) Wittrock of Halbur, Peg (Dave) Sanders of Carroll, Nick (Donna) Wittrock of Carroll, and Walter Jr. “Chip”(Renee) Wittrock of Spirit Lake; 30 grandchildren, 47 great-grandchildren with 3 more on the way; sisters-in-law: Darlene Wittrock of Halbur, and Vernell Wittrock of Carroll; as well as many nieces, nephews, and other extended relatives. LaVerne was preceded in death by her husband, Walter in 2014; son-in-law: Rudy Wolf; grandchildren: Jenny Wittrock and Bart Wittrock; her parents: Herman and Laura Meyer, her sister: LaRene Meyer.

The family of LaVerne Wittrock created this Life Tributes page to make it easy to share your memories.

A link to LaVerne&#39;s Funeral Mass Recording can be found here:...

Send flowers to the Wittrock family.