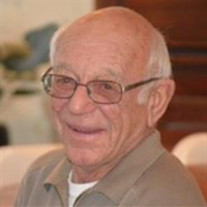 LaVern Neu, of Pleasanton, California, loving husband, proud father of 5, grandfather of 16 & great-grandfather to 17 was called home to God on July 7, 2019 after a short illness. Mass of the Christian Burial celebrating LaVern’s life will be held at 10:30 a.m. Friday, August 2, 2019 at Sacred Heart Catholic Church in Templeton, Iowa. Burial will be held in the parish cemetery with military honors conducted by the Dedham American Legion. A visitation will be held at the Sharp Funeral Home in Carroll on Thursday, August 1, 2019 from 5 until 7 p.m. where there will be a Christian Wake Service held at 7 p.m. Visitation will resume at Sacred Heart Church in Templeton on Friday morning from 9:30 a.m. to 10:15 a.m. Funeral arrangements are under the direction of the Sharp Funeral Home in Carroll, and online condolences may be left for LaVern’s family at www.sharpfuneral.com. LaVern was born in Roselle, Iowa to Peter & Francis Neu. There he attended school and worked on the family farm. He then joined the United States Army and proudly served his country for 2 years during the Korean War. On May 29th 1956 he married the love of his life Arleen Klocke & they were married 56 years until her death in 2012. They moved west to California where they put down roots to raise a family. LaVern joined the road construction industry which he remained in for 62 years working all over the San Francisco Bay Area. In 1965 he was a founding member of Neu Bros. Grading & Paving along with his brothers. In 1980 he created his own company of Re-New Construction. Over the years he mentored, employed and was a friend to all. He worked hard, was fair and was a genuinely beloved by many. He loved all sports, playing cards, and hosting parties for his family. He is survived by his children Sharon (David) Amaya, Nancy Neu-Lober, Kevin (Tabitha) Neu, Rhonda (Mike) Courtemanche, 33 grandkids, sisters Edna Mae Wuebker, Patricia (Darrell) Berg, brothers Earl (Jeanne) Neu, William (Jackie) Neu, Kenneth Neu, numerous nieces, nephews and in-laws. He is preceded in death by his wife Arleen Neu, son Brian Neu, grandson Kevin Jason, son in law Tom Lober, brother Jerome Neu and sister Vivian Hulsing. The family requests any donations be made to the American Cancer Society.

The family of LaVern Neu created this Life Tributes page to make it easy to share your memories.

Send flowers to the Neu family.