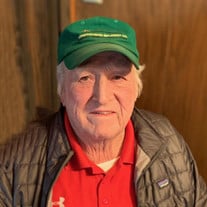 Larry Schenkelberg, age 85, of Carroll, died Friday, April 10, 2020 at St. Anthony Nursing Home in Carroll. A Private Family Funeral Service will be held at the Sharp Funeral Home in Carroll on Tuesday, April 14, 2020. Fr. Kevin Richter of St. John Paul II Parish in Carroll will preside. Casket Bearers will be Bill Schenkelberg, Justin Schenkelberg, Benet Snyder, Rich Schenkelberg, and Gene Schenkelberg. Burial will be in Mt. Olivet Cemetery in Carroll. Military Honors will be conducted by the Carroll American Legion. A Live Stream Broadcast and recording of Larry’s service can be found by visiting the Sharp Funeral Home Carroll, Iowa YouTube Channel at this link: https://www.youtube.com/channel/UCqd2eeRJk5RTdEJoEooUoAQ. An Icon on that page will be available by 10:55 a.m. Tuesday. In Lieu of flowers memorials may be directed to St. John Paul II Parish or the Kuemper Catholic Schools Foundation. Those wishing to mail their memorial may direct it to: Larry Schenkelberg Memorial c/o Sharp Funeral Home, 226 W. 8th Street, Carroll, IA 51401. Funeral arrangements are under the guidance of the Sharp Funeral Home in Carroll, and online condolences may be left for Larry’s family at www.sharpfuneral.com. The family intends to have a larger memorial service and reception for additional friends to celebrate Larry’s life after the state’s gathering restrictions have been rescinded. Larry, the son of William and Sophie (Schmitz) Schenkelberg was born on December 27, 1934 in Carroll, Iowa. He grew up in Carroll and graduated from Carroll High School. Larry spent his entire life in the Carroll community except for his honorable service to our country in the United States Army Honor Guard during the Eisenhower Administration. He was very proud to have served his country often sharing stories about the many notable international dignitaries he encountered during his service, and the baseball league he played in. Soon after his honorable discharge in 1962 he began working at Schenkelberg Implement in Carroll with his family. Larry worked as a successful salesman for Schenkelberg Implement, developing relationships with his customers whom he regarded as friends first. Friendship was a priority to Larry in all aspects of his life. Larry enjoyed sports. He was a fan of Iowa State Athletics, the Minnesota Twins, and the Chicago Cubs. He took in many sporting events, including World Series, The Masters, and vacationing to many Spring Trainings in Arizona and Florida. He was an avid golfer, and was exceptional at table tennis. Most of all Larry enjoyed the relationships he developed from his lifetime in the Carroll area. Larry was a member of the Carroll Moose Lodge for many years, and a devoted parishioner to St. John Paul II Parish- Holy Spirit Church in Carroll. He was generous to friends and family and a supporter of the Catholic Church and Schools. Larry is survived by his sister-in-law, Virginia (Alfred) Schenkelberg of LeMars; as well as many nieces, nephews, other extended relatives and many friends. Larry was preceded in death by his parents; his sister, Donna (Alfred) Snyder; a sister in infancy, Mary Schenkelberg; his brothers: Alfred Schenkelberg and Paul (Gloria) Schenkelberg, Bill (Jean) Schenkelberg and Marvin Schenkelberg; his nieces, Pamela Schenkelberg, Sandra (Larry) Dalton; his nephews, Michael Snyder, Scott Schenkelberg, and Robert Schenkelberg; and a nephew-in-law: Tom Nees.

The family of Larry Schenkelberg created this Life Tributes page to make it easy to share your memories.

Send flowers to the Schenkelberg family.