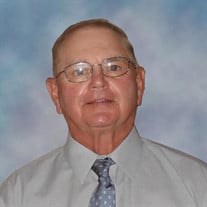 Larry Irlbeck, 76, of Westside, IA died peacefully, Wednesday July 18, 2018 at Mayo Clinic, Methodist Hospital in Rochester, Minnesota, surrounded by his family, following a yearlong battle with lymphoma cancer. Mass of the Christian Burial will be celebrated at 10:30 a.m., Tuesday, July 24, 2018 at St. John’s Catholic Church in Arcadia. The Celebrant will be Fr. Mark Stoll. Music will be by Sharon Bierl and the St. John’s Choir. Lectors will be Susie Irlbeck and Joni Schramm. Gift Bearers will be Larry’s grandchildren. Eucharistic Ministers will be Susie and Bob Irlbeck and Beth Morris. Casket Bearers will be nephews: Jesse Irlbeck, Mike Irlbeck, Kevin Berg, Brian Berg, Jim Irlbeck, David Irlbeck, Doug Irlbeck, Daryl Irlbeck, and Allen Steinkamp. The Arcadia American Legion will form an honor guard for the funeral mass. Burial will be at a later date in St. John Cemetery in Arcadia. Friends may call at the Sharp Funeral Home in Carroll after 4 p.m. on Monday where there will be a Christian Wake Service at 7 p.m. Additional visitation will be from 9-10 a.m. on Tuesday at the funeral home. In lieu of flowers memorials may be given to the Gift of Life Transplant House in Rochester, Minnesota. Funeral arrangements are under the direction of the Sharp Funeral Home in Carroll and online condolences may be left for Larry’s family at www.sharpfuneral.com. Lawrence Joseph Irlbeck, son of Albert and Elizabeth (Hoffman) Irlbeck, was born on July 8, 1942 in Carroll, Iowa. He attended St. John’s Catholic School and graduated from Kuemper Catholic High School in 1960. He then graduated from Universal Trade School and served in the United States Army and National Guard until he was honorably discharged. Larry worked at the Arcadia Cooperative, and began his proud career of farming. On September 17, 1966, Larry was united in marriage to the love of his life, Joyce Tigges, in Dedham, Iowa. The couple farmed in Westside, where they raised their 5 children. Larry enjoyed farming, machinery auctions, restoring tractors, Ford trucks, playing cards, and socializing with his many friends. He was an entrepreneur with a work ethic that inspired those around him. He had a magnetic personality and never knew a stranger. His wittiness always found humor to make light of every situation. Even in his long battle with cancer, he would make the nurses and doctors laugh with his little sayings, “Larryisms”. It was said they would fight over who got to take care of him. His strength was admired by many as he was often told he was strong as an ox. He was persistent and a true fighter up to the end. Most of all, Larry, Patriarch of his family, cherished every moment with his three boys, twin girls, and seven grandchildren. His pride and joy was to see all five of his children graduate from college. He was their biggest cheerleader always encouraging them to pursue their dreams. Larry was a member of St. John’s Parish, the Arcadia American Legion, Carroll County Pork Producers and served on the Arcadia Cooperative Board. Larry is survived by his wife of nearly 52 years, Joyce of Westside; son Bob (Susie) of Centerville, MN, grandchildren Justin, Jacob (Torri), and Kayla; son Kevin (Jody) of Atlanta, GA, grandson, Hayden; son Dan (Teresa) of Westside, grandsons Alex and Ben; daughter Carla (Steve) Kuzynowski of Ankeny, grandson, Mitch; daughter Christi of West Des Moines; sister Marie (Gerald) Berg of Arcadia, brother, Alan (Sue) Irlbeck of Avoca; brothers-and sisters-in-law: Laverne Steinkamp, Linda Irlbeck, Laverne (Anna) Tigges, Marvin Tigges, Duane (Shirley) Tigges, Randy(Cathy) Tigges, Joni (Scott) Schramm; and many nephews, nieces and treasured friends. Larry is preceded in death by his parents, Albert and Elizabeth; brothers: Edwin (Marijane) Irlbeck, and Elmer Irlbeck; and sisters: Alice Steinkamp and Lavon Irlbeck.

The family of Larry Irlbeck created this Life Tributes page to make it easy to share your memories.