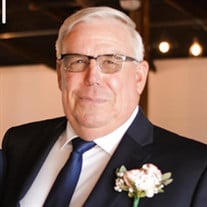 Larry “Fred” Boeckman, age 66, of Breda, passed away unexpectedly on Thursday, July 30, 2020. A private Mass of Christian Burial will be celebrated at 10:30 a.m. Tuesday, August 4, 2020 at St. Bernard’s Catholic Church in Breda. The Celebrant will be Fr. Timothy Friedrichsen. Lectors for the funeral mass will be Theresa Boeckman and Kris Boeckman. Honorary Casket Bearers will be: Mark Banovic, Chris “Boze” Nieland, Kristy “Kwee” McDermott, Michael O’Keeffe, Patrick O’Keeffe, Dr. James O’Keeffe, Mark “Spark” Tiefenthaler, Loren Dentlinger, Danny Tiefenthaler, Pam Dunn and Bev Bruning. Casket Bearers will be: Bob “Beke” Boeckman, Ray Lenz, Dale Tiefenthaler, Dean Boeckman, Daryl Boeckman, Doug Brincks, Dean Stork and Herm Nieland. A livestream of the funeral mass will be available at the time of the service on the Christ The King Catholic Community-St. Bernard’s Catholic Church Facebook Page at https://www.facebook.com/ChristTheKingCathollicCommunityBredaIowa/. The public is invited to attend the committal service at 11:30 a.m. Tuesday in St. Bernard’s Cemetery in Breda and are invited to participate in the funeral procession from St. Bernard’s Church following mass. A public visitation, with no family present will be held from 4-7 p.m. Monday at the Sharp Funeral Home in Breda. Those in attendance will be required to practice Social Distancing, and masks are recommended. Those wishing to mail memorials may mail to Larry Boeckman Family C/O Sharp Funeral Home, 226 W. 8th Street, Carroll, IA 51401. Memorials will be directed to the Breda Community Pool Project and St. Anthony Regional Cancer Center. Funeral arrangements are under the direction of the Sharp Funeral Home in Breda, and online condolences may be left for Larry’s family at www.sharpfuneral.com. Larry (Fred) Boeckman was born on April 17, 1954 to Duane and Madonna Boeckman of Breda Iowa. He was a graduate of St. Bernard High School in 1972. Larry was United in marriage to his high school sweetheart, Jeanne (Determan) Boeckman on October 18th 1974 and fathered 4 children who were his absolute pride and joy. Larry worked alongside his father in his feed business as well as a Hog buyer for Western Iowa Pork until their closing in 1985. In 1986, he was given the opportunity to work for Ray Lenz in the insurance industry.... an opportunity that changed his life! Fred was faithful to the business until his retirement in April 2020. His time at Lenz insurance allowed him to pursue his life long dream and build his own farm business which was a dream come true to him. In 1993 alongside his friends, they took a chance and pioneered the building of The Breda Golf Course. He will forever be a staple of the golf course and his beloved hometown of Breda Iowa. Fred died suddenly on Thursday July 30th doing what he loved more than life itself, golfing with his buddies. If you knew Fred, you know he rarely was not smiling and never missed the chance to engage in a conversation or miss a party. His shell was hard and he was tough as nails, however his soul was soft and his empathy toward others was second to none. His true love for his family was above all! May he find peace with his parents in heaven and his special uncle (Ott Boeckman). Larry served as a proud member of the Breda Volunteer Fire Department for 24 years. He was a parishioner and advocate of St. Bernard parish all of his living life. Larry was survived by his Wife Jeanne (Determan) Boeckman; Daughter Amy Brannan and special friend Richard Meiners, Christin Boeckman Banovic (Mark) Jeffrey Boeckman (Mandy) David Boeckman (Liz); grandchildren: Ella, Meredith, Walker, Charlie, Caleb, Cyler, and Cooper. His beloved twin brothers, Dean (Sheila) Boeckman, Daryl (Kris) Boeckman; three sisters: Cheryl (Dean) Stork, Carlene (Doug) Brincks, Deb (Herm) Nieland; His brother in law Gary (Janice) Determan, Jim (Jean) Determan, his sister in law, Mary (Dr. James) O’Keeffe; as well as many nieces, nephews, other extended relatives and many friends. Larry was preceded in death by his parents, Duane “Buck” and Madonna Boeckman; his parent’s in law, Melvin and Phyllis Determan; his niece, Melissa Stork.

The family of Larry "Fred" Boeckman created this Life Tributes page to make it easy to share your memories.

Send flowers to the Boeckman family.