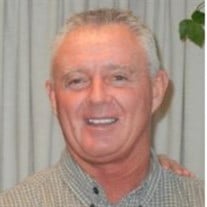 Kevin "Kelly" Feldman, 59 of Carroll, died unexpectedly on Sunday, August 1, 2021, at his residence in Carroll. A Funeral Mass will be held at 11 a.m., Friday, August 6, 2021, at St. John Paul II Parish - St. Lawrence Church in Carroll. The Celebrant will be Fr. Timothy Schott. Music will be by Kathy Halbur. Gift Bearers will be Eric Feldman and Cole Feldman. Eucharistic Minister will be Jean Knobbe. Burial will be in Calvary Cemetery in Ruthven, Iowa. A live-stream and recording of Kelly's service is available at the following link: https://youtu.be/kEjWxqHM_MY Visitation will be held from 9:30-10:30 a.m. on Friday at the church. Funeral arrangements are under the guidance of the Sharp Funeral Home in Carroll and online condolences may be left for Kelly's family at www.sharpfuneral.com. The son of John Paul "Jack" and Mary Helen (Hand) Feldman, Kevin “Kelly” Feldman was born on October 6, 1961, in Spencer, Iowa. Kelly spent his younger years near Terril, Iowa and graduated from Terril High School. He furthered his education at the University of Iowa where he received his bachelor’s degree. Kelly began his working career as a counselor at Jerry Rabiner Boys Ranch in Fort Dodge. He later worked for New Hope Village in Carroll and Opportunity Living in Lake City. Most recently, Kelly was employed at Job Corps in Denison. In September of 2002, Kelly was married to Lois Potthoff. To this union was a son, Tory Feldman. Kelly was an avid Iowa Hawkeyes Fan, enjoyed golfing, and watching his son Tory’s athletic events. He loved spending time with his family and was very instrumental in his stepchildren’s lives. Kelly is survived by his son Tory Feldman of Carroll; his mother, Mary Feldman of Emmetsburg; his siblings: Mike (Mary) Feldman of Ruthven, Maureen Feldman of Wallingford, Tom (Rhonda) Feldman of Carroll, Theresa (Ron) Eick of Terril, Jim (Cindy) Feldman of Fostoria, Jenny (Ken) Murray of North Liberty, Katy Foley of Largo, Florida, and Barb (Dan) Mullenbach of Urbandale; Tory’s mother, Lois Potthoff and her children, Chance Cleveland and Eli Cleveland; as well as many nieces, nephews, and other extended relatives. Kelly was preceded in death by his father, John "Jack" Feldman.

The family of Kevin "Kelly" Feldman created this Life Tributes page to make it easy to share your memories.

Send flowers to the Feldman family.