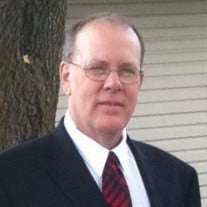 Kevin Berning, 58 of Jefferson, passed away on Saturday July 27, 2019 at his home in Jefferson, Iowa. Mass of the Christian Burial will be celebrated at 9:30 a.m., Saturday, August, 3, 2019 at St. John Paul II Parish-Holy Spirit Church in Carroll. The Celebrant will be Fr. Kevin Richter. Music will be by Dr. Franklyn Busby, Pastoral Musician and the Holy Spirit Resurrection Choir. Lector will be Scott Berning. Gift Bearers will be Bella Berning and Ethan Berning. Casket Bearers will be: Rich Berning, Mike Berning, Scott Berning, and Ethan Berning. Burial will be in Mt. Olivet Cemetery in Carroll. Friends may call at the Sharp Funeral Home in Carroll after 5 p.m. on Friday where there will be a Christian Wake Service at 7 p.m. The casket will be moved to Holy Spirit Church on Saturday morning where additional visitation will be held from 8:45 a.m. until time of the funeral mass. Funeral arrangements are under the guidance of the Sharp Funeral Home in Carroll and online condolences may be left for Kevin’s family at www.sharpfuneral.com. Kevin was born on July 14, 1961 and grew up on a family farm in Breda, Iowa. He and his siblings helped their parents with the corn and soy bean crops as well as tend to the livestock. In 1970 he and his family moved to Carroll Iowa to attended Holy Spirit Elementary and Middle School and Kuemper High School. During his youth he played little league baseball, high school football and track for Kuemper High School. During high school, he enjoyed driving his beat-up car and taking road trips with his brothers and close friends to Ames and Fort Dodge. Kevin held several jobs including selling Des Moines Register newspapers on Highway 30, worked at Country Kitchen, Pizza Hut and Fareway Grocery Store as well as Farmland Industries. Kevin struggled with health issues for over 35 years. In spite of his struggles he maintained a positive outlook on life and had many friends. Kevin was a very transparent person whom shared his feelings with all. Kevin was a lover of classic rock music (especially Bob Dylan, Gordon Lightfoot, Bob Seger, Styx and Kansas). Kevin was an avid fan of the Pittsburgh Steelers football team as well as the late 1970s Pittsburgh Pirates baseball team. His favorite players were Terry Bradshaw, Joe Greene and Ben Roethlisberger and Willie Stargell. Kevin is survived by his siblings: Michael and his wife Naomi of Grapevine, TX, Richard Berning of Carroll, Karen Smith and her husband Tom Smith of Chester, VA, Sharon and her husband Keith Stickrod of Carroll, and Scott Berning of Pella, Iowa as well as several nephews and nieces and cousins. Kevin was preceded in death by his father Clarence Berning and his mother Marcella Berning as well as his grandparents Leo and Francis Berning of Carroll and William and Margaret Schmitz of Carroll.

Kevin Berning, 58 of Jefferson, passed away on Saturday July 27, 2019 at his home in Jefferson, Iowa. Mass of the Christian Burial will be celebrated at 9:30 a.m., Saturday, August, 3, 2019 at St. John Paul II Parish-Holy Spirit Church in Carroll.... View Obituary & Service Information

The family of Kevin Berning created this Life Tributes page to make it easy to share your memories.

Kevin Berning, 58 of Jefferson, passed away on Saturday July...