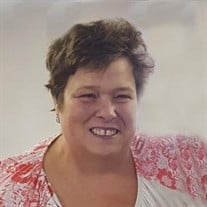 Kay Frances Wernimont, of Breda, passed away unexpectedly on Thursday, February 13, 2020 in Prescott Valley, Arizona. Mass of the Christian Burial will be celebrated at 10 a.m. Wednesday, February 26, 2020 at St. Bernard’s Catholic Church in Breda. The Celebrant will be Fr. Timothy Friedrichsen. Con-Celebrant will be Fr. Timothy Pick. Music will be by Marilyn Hundling and the St. Bernard’s Choir. Gift Bearers will be Brian and Sophie Wernimont. Eucharistic Ministers will be Mary Snyder and Mary Kay Uhlenkamp. Casket Bearers will be Kay’s sons: Rudy Wernimont, Bentley Wernimont, Jaret Wernimont, Anton Wernimont, Brent Wernimont, and Evan Wernimont. Burial will be at a later date in St. Bernard’s Cemetery in Breda. The Breda American Legion Auxiliary will form an honor guard for the funeral mass. Friends may call at St. Bernard’s Church in Breda after 4 p.m. on Tuesday, where there will be a Rosary prayed at 5 p.m., and a Christian Wake Service will be held at 6:30 p.m. Visitation will resume at the church on Wednesday morning from 9a.m.-9:45a.m. In lieu of flowers memorials may be left at the church to be directed to the Kay Wernimont Memorial Fund. Funeral arrangements are under the direction of the Sharp Funeral Home in Breda, and online condolences may be left for Kay’s family at www.sharpfuneral.com. Born on February 20, 1961 in Primghar, Iowa, Kay was the daughter of Gilbert and Erma (Smith) Axdahl. Kay grew up on the family farm by Paullina. Kay was baptized and confirmed at Siloam Lutheran Church in Paullina. Kay graduated from Paullina High School in 1979. She attended Northwest College in Orange City. Kay married George Wernimont on August 22, 1981 at Siloam Lutheran Church. The couple resided on a farm south of Auburn where they started their family. In 1994, George and Kay moved to their current location, west of Breda. Kay was a member of the St. Bernard’s Parish and the American Legion Auxiliary. She spent many years as a homemaker, raising their children. Kay worked at Al’s Corner, Pac N’ Save and Mike’s Meats in Carroll. Kay was a wonderful baker and an avid card player. She often traveled with a deck of cards and was always eager to play a round of cards with her sisters, children and grandchildren. Kay enjoyed traveling with her husband, visiting family and sightseeing and spending time with her grandchildren. Kay is survived by her husband, George. Children: Rudy (Dehlia) Wernimont of Emmetsburg, Jana Wernimont of Omaha, Patricia Wernimont of Breda, Georgialena Wernimont of West Des Moines, Bentley (Kassie) Wernimont of Breda, Jaret Wernimont of Omaha, Anton Wernimont of Breda, Kate Wernimont of Des Moines, Brent Wernimont of Breda and Evan Wernimont at home. Her grandchildren: Johnny Edwards, Carter Wernimont, Rowan Hiykel, Erma Hiykel, Blair Hiykel, Oliver Wernimont, Reagan Wernimont, Anastasia Wernimont. Her siblings: Marcia (Randy) Kuehl of Moville, IA, Patricia Burger of Hurst, TX, Jay Axdahl of Sanborn, IA, Lori (Kevin) Brown of Tucson, AZ, mother-in-law, Patricia Pike of Prescott Valley, AZ, Sister-in-laws, Laura (Randy) Schaffer of Lake View and Linda (Mike) Conley of Mooresville, NC, brother-in-laws, Norm (Diane) Wernimont of Auburn, Brian (Sophie) Wernimont of Pleasant Hill, Steve Wernimont of Prescott Valley, AZ, and many nieces and nephews. Kay is preceded in death by her parents Gilbert and Erma Axdahl; her father-in-law: Cleo Wernimont, Pete Pike and nephew Nick Schaffer. Kay showed much love for her family and community by offering her time whenever needed. Kay had a heart of gold and a smile that illuminated the room. She will be remembered and missed by many.

The family of Kay Frances Wernimont created this Life Tributes page to make it easy to share your memories.

Kay Frances Wernimont, of Breda, passed away unexpectedly on...