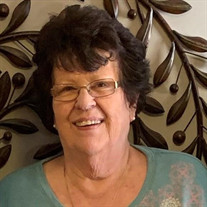 Kathryn Bedford, 75 of Carroll, died Sunday, December 23, 2018 at Minnesota Lakes, Minnesota. Mass of the Christian Burial will be celebrated at 10 a.m. Friday, January 4, 2019 at St. John Paul II Parish - St. Lawrence Catholic Church in Carroll. The Celebrant will be Fr. Shinoj Jose. Music will be by Kate Cuddy and the St. Lawrence Choir. Lector for the funeral mass will be Deb Koster. Gift Bearers will be Charlie Bedford and Nicole Bedford. Eucharistic Ministers will be: Mary Jo Berning, Jim Berning and Diane Hannasch. Casket Bearers will be: Samantha Bedford, Ryan Bedford, Hannah Osdoba, Emily Osdoba, Connor Bedford, and Kaitlyn Bedford. Burial will be in Mt. Olivet Cemetery in Carroll. The Carroll Catholic Daughters of the Americas will form an honor guard for the funeral mass. Friends may call at the Sharp Funeral Home in Carroll after 4 p.m. on Thursday, January 3, 2019 where there will be a Carroll Catholic Daughters of the Americas rosary at 5 p.m. and a Christian Wake Service at 6 p.m. The casket will be moved to St. Lawrence Church on Friday morning where additional visitation will be held from 9-9:45 a.m. Memorials may be left at the funeral home or the church for St. Lawrence Church. Funeral arrangements are under the direction of the Sharp Funeral Home in Carroll and online condolences may be left for Kathryn’s family at www.sharpfuneral.com. Born on April 25, 1943 at Carroll, Iowa, Kathryn Helen was the daughter of William and Rose (Schroeder) Badding. She attended St. John’s School in Arcadia and later graduated from Kuemper Catholic High School in 1961. Following her schooling she was employed with Bell Telephone. On June 15, 1963, Kathryn was united in marriage to Elmer Bedford at St. John’s Catholic Church in Arcadia. The couple made their home in Carroll where she raised their family and also worked as an office manager. She enjoyed bowling, reading and playing bridge. Kathryn was a member of St. Lawrence Church, Carroll Catholic Daughters of the Americas, and the Arcadia American Legion Auxiliary. Kathryn also volunteered for several years at the New Hope Village Bargain Shop. Kathryn is survived by her husband Elmer Bedford of Carroll; her children: Frank Bedford of Indian Head, IL, Steve (Nicole) Bedford of Ft. Dodge, Mary (Mike) Osdoba of Minnesota Lakes, MN, and Joseph Bedford of San Diego; her grandchildren: Samantha Bedford, Ryan Bedford, Charlie Bedford, Hannah Osdoba, Emily Osdoba, Connor (Inna) Bedford, Kaitlyn Bedford, and Grace (Wayne) Lundeen; her great-grandchild, Jaxon Lundeen; her siblings: Mary Jo (Pete) Berning of Arcadia, Rosie (Lon) Diers of Carroll, Janet Badding of Elk Hart, IN, and Bill (Mardy) Badding of Carroll; her sisters-in-law: Joni Badding of Carroll and Surge Badding of Carroll; as well as many nieces, nephews, and other extended relatives. Kathryn was preceded in death by her parents, William and Rose Badding; her parents-in-law, C.W. and Margaret (Renze) Bedford; her siblings: Bob Badding, Don (Carolyn) Badding, Joe Badding, and a brother in infancy, Jackie; her niece, Samantha Badding; and her nephews: John Berning and Jack Badding; and her sister-in-law, Luella (Paul) Grote.

The family of Kathryn Bedford created this Life Tributes page to make it easy to share your memories.

Send flowers to the Bedford family.