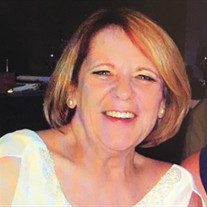 Karen Olson, age 60 of Carroll, died Friday, July 7, 2017 at St. Anthony Regional Hospital in Carroll. A Celebration of Karen’s Life will be held at the Sharp Funeral Home in Carroll on Saturday, September 30, 2017, from 2-4p.m. with a sharing of memories at 4 p.m. Funeral arrangements are under the direction of the Sharp Funeral Home in Carroll and online condolences may be left for Karen’s family at www.sharpfuneral.com. In lieu of flowers, memorials may be sent to The Howard Center, 1319 Early St. Sac City, Iowa, 50583. Karen was born on November 26, 1956 at Lady of Lourdes Hospital in Camden, New Jersey the daughter of David and Pauline (Clark) Marshall. She graduated from Triton Regional High School in Runnemede, New Jersey in 1975. She continued on to Camden County Vocational School for Dental Technician in 1976 and later continued her schooling in X-Ray Tech in 1978. During that time she found her passion in working with special needs children and continued that passion until the time of her death. In 2001, she became the Contract Director at the Howard Center in Sac City, Iowa. Karen met her husband Tim in 1983 and they were married on June 29, 1985. Their son Jared was born 3 years later and the family moved to Iowa in 1991. She enjoyed caring for her family, fishing, camping, and riding on the back of her husband’s Harley. Karen also enjoyed wine tasting, chocolate, crossword puzzles, and visiting with family and friends. Karen was an avid Iowa Hawkeye and Penn State fan. Her true passion was caring for individuals with special needs. Karen is survived by her loving and devoted husband Tim Olson of Carroll; her son Jared Olson of Carroll; her sister, Susan (Thurman) Hogan and their children, Kelsey and Marshall; her brother, Mark (Julie) Marshall and their children, David (Kristin) and Kirie; her mother-in-law, Jan Olson; and her loving friends: Janelle, Roxie, and Tacey. Karen was preceded in death by her parents: David and Pauline Marshall; her brother, Karl Marshall; and her grandparents: George and Ivy Clark and Colin and Doris Marshall.

Karen Olson, age 60 of Carroll, died Friday, July 7, 2017 at St. Anthony Regional Hospital in Carroll. A Celebration of Karen&#8217;s Life will be held at the Sharp Funeral Home in Carroll on Saturday, September 30, 2017, from 2-4p.m. with... View Obituary & Service Information

The family of Karen Olson created this Life Tributes page to make it easy to share your memories.

Send flowers to the Olson family.