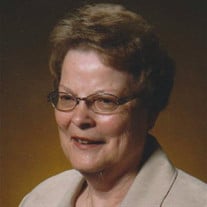 Karen Lampman, age 73, of Arcadia, died Sunday, November 18, 2018 at Mercy Medical Center in Des Moines, Iowa. Mass of the Christian Burial will be celebrated at 10:30 a.m. Wednesday, November 21, 2018 at St. John’s Catholic Church in Arcadia. The Celebrant will be Fr. Timothy Schott. Concelebrant will be Fr. Richard Remmes. Music will be by Sharon Bierl and the St. John’s Choir. Mass Servers will be Brianna, Brett, and Blake Lux. Lector will be Deb Vonnahme. Gift Bearers will be Jay Goeser, Tricia Mitchell, and Becky Skinner. Eucharistic Minister will be Orlin Steinkamp. Casket Bearers will be Jay Goeser, Jeff Goeser, Dan Wittrock, Gary Riesselman, Tony Sievers, and Scott Lampman. Burial will be in the parish cemetery. The St. John’s Guild, and the Arcadia American Legion Auxiliary will form an honor guard for the funeral mass. Friends may call at the Sharp Funeral Home in Carroll, after 4p.m. on Tuesday, where there will be a Rosary prayed at 5 p.m., and a Christian Wake Service will be held at 6:30 p.m. Additional visitation will be held at the Sharp Funeral Home in Carroll from 9 to 9:45 a.m. Wednesday morning. Funeral arrangements are under the direction of the Sharp Funeral Home in Carroll, and online condolences may be left at www.sharpfuneral.com. Karen Ann (Mitzel) Lampman was born on April 8, 1945 in her grandparents’ home in Manilla, Iowa. She is the daughter of Francis and Edna (Grau) Mitzel. Karen grew up in Manilla and graduated from Manilla High School in 1963. She started working at St. Anthony Hospital in Carroll from 1963 to 1969. She then returned in 1974, and worked until she retired on September 5, 2008 after working there a total of 40 years. Karen and Ralph Lampman, the son of Edward and Viola Lampman, were married on August 20, 1966, and they lived in the Arcadia and Carroll area most of their married life. Ralph and Karen moved to Arcadia, in August of 2002. Karen enjoyed going out for coffee and lunch with family and friends. Karen and Ralph were very giving of their time, volunteering in many capacities for many causes. One thing they volunteered for was taking the canned goods collected at St. John’s Catholic Church to the Food Pantry at Thanksgiving time for many years. After Karen retired, she volunteered at the Carroll County Historical Museum, serving as a Director. On August 11, 2011 Karen suffered a stroke, and it affected her left side. This stroke changed her life, as she had to give up much of her volunteer work. In 2017 Ralph and Karen, along with another couple, volunteered to run the Arcadia Legion Hall, booking all the wedding events, and cleaning the facility. Karen belonged to the Arcadia American Legion Auxiliary, St. John Parish, and St. John’s Ladies Guild. Karen was preceded in death by her father, Francis Mitzel, her grandparents: Hugo and Anna Grau, and Frank and Marcellina Mitzel; her brothers in-law: Jim Goeser, Gerald Wittrock, and Donald Lampman; nephew, Christopher Goeser, niece Katie Kernes, great-niece Alexi Goeser. Karen is survived by her husband, Ralph Lampman of Arcadia; her mother, Edna Mitzel of Manilla; her sister Janet Goeser of Harlan; sisters-in-law: JoAnn (Andy Riessselman) of Carroll; Berniece Wittrock of Carroll, Mary (Ron) Sievers of Randall, and Sandy Lampman of Manning, as well as many nieces, nephews, other relatives, and many friends.

The family of Karen Lampman created this Life Tributes page to make it easy to share your memories.

Send flowers to the Lampman family.