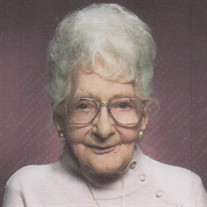 Juliana H. Stork, age 105 of Breda, died Thursday, February 22, 2018 at St. Anthony Nursing Home in Carroll. Mass of the Christian Burial will be celebrated at 10:30 a.m., Tuesday, February 27, 2018 at St. Bernard’s Catholic Church in Breda. The Celebrant will be Fr. Mark Stoll. Music will be by Marilyn Hundling and the St. Bernard’s Choir. Lector for the funeral mass will be Steven Ballard. Gift Bearers will be Kathy Bork, Norma Wessling and Marilyn Wessling. Casket Bearers will be Julie’s nephews. The Breda American Legion Auxiliary will form an honor guard for the funeral mass. Burial will be in the parish cemetery. Friends may call at the Sharp Funeral Home in Breda after 5 p.m. on Monday where there will be a Christian Wake Service at 6:30 p.m. In lieu of flowers memorials may be left at the funeral home or the church for St. Bernard’s Parish. Funeral arrangements are under the direction of the Sharp Funeral Home in Breda and online condolences may be left for Julie’s family at www.sharpfuneral.com. Born on January 10, 1913 at Mt. Carmel, Iowa, Julie was the daughter of Henry and Helen (Julich) Stork. Julie attended Our Lady of Mt. Carmel School and earned her diploma on May 14, 1926. Following her schooling, she dedicated her time to helping her family and worked for number of individuals and families in the Breda and Carroll communities. In the late 1950’s and 1960’s she worked for Fr. Frank Brady in Sanborn, Iowa, the McCarty family in San Diego, California and the Ballard family in Long Island, New York before returning to the Breda community to help care for her ailing parents. She enjoyed sewing, embroidery, cooking, and reading. Most of all, she enjoyed spending time with the many people who were blessed to know her. Julie lived in her home in Breda until she was 100 when she moved to St. Anthony Nursing Home in Carroll. Julie was a member of St. Bernard’s Parish and the Breda American Legion Auxiliary. Julie is survived by her sister, Sister Mary Myron Stork of Lacrosse, WI; her sister-in-law, Ann Stork of California; as well as many nieces, nephews, other extended relatives and many dear friends. Julie was preceded in death by her parents; her sisters: Josephine Reinken, Paula Stork, Margaret Ballard, and Helen Wessling; her brothers: Mathias Stork, John Stork, Joseph Stork, Victor Stork, Richard Stork, Henry Stork and Fred Stork.

The family of Julie Stork created this Life Tributes page to make it easy to share your memories.

Send flowers to the Stork family.