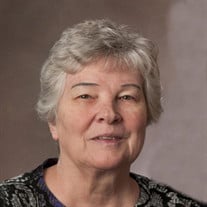 A recording of Judy's service can be found at this link: https://youtu.be/VmWf-Ll-3GE. Judy L. Muhlbauer, 76 of Halbur, died Wednesday, December 16, 2020 at Accura Healthcare of Carroll. A private family Funeral Mass will be celebrated at 10:30 a.m., Tuesday, December 22, 2020 at St. Augustine Catholic Church in Halbur. The Celebrant will be Fr. Timothy Pick. Instrumental music will be by Julie Sibbel. Lectors for the Funeral Mass will be Jake Muhlbauer and Scott Muhlbauer. Casket Bearers will be Todd Muhlbauer, Scott Muhlbauer, Jason Botos, Jake Muhlbauer, Dylan Muhlbauer and Chas Muhlbauer. Burial will be in St. Augustine Cemetery in Halbur. Those wishing to send a memorial please direct to Judy Muhlbauer Family, c/o Sharp Funeral Home, 226 W. 8th St. Carroll, IA 51401. Funeral arrangements are under the guidance of the Sharp Funeral Home in Carroll and online condolences may be left for Judy’s family at www.sharpfuneral.com. The daughter of Felix and Hilda (Kasparbauer) Vogl, Judith was born on September 24, 1944 at her family home. She grew up on her family’s farm near Manning and graduated Salutatorian from Manning High School in 1962. On November 6, 1965, Judy was united in marriage to Jake Muhlbauer at Sacred Heart Catholic Church in Manning with Fr. P.J. Nooney officiating. Judy and Jake made their home in Halbur following their marriage. She was employed with Manning Community Schools as an Administrative Assistant and later was the secretary for Halbur – Templeton Cooperative. Judy was a devoted homemaker, raising her family, and also volunteered in various capacities with several organizations. She loved her flowers, gardening and was an excellent cook; her cookies and homemade bread being her specialties. Judy’s greatest joy was her family and always enjoyed traveling to visit her children and grandchildren. She was a member of St. Augustine Parish and Parish Ladies Guild. Judy is survived by her husband Jake Muhlbauer of Halbur; her children: Doug (Katrina) Muhlbauer of Colorado Springs, CO, Todd (Dawn) Muhlbauer of Decorah, Scott (Sara) Muhlbauer of Osh Kosh, WI, and Holly (Jason) Botos of Atlantic; her grandchildren: James, Jake, Dylan, Chas, Gus, Madison and Morgan; her siblings: Ron (Gay) Vogl of Manning, Dory (Wayne) Sell of Silver City, Marge (Paul) Cumpton of Omaha, and Pat Vogl of Council Bluffs; her brothers-in-law and sisters-in-law: Norb (Marlou) Muhlbauer of Omaha, Gene (Judy) Muhlbauer of Halbur, Ron Muhlbauer of Carroll, Larry (Carol) Muhlbauer of Manning, Dick (Jeannine) Muhlbauer of Carroll, Vern (Chris) Muhlbauer of Omaha, Richard Malone of Omaha; her dear friend, Eileen Muhlbauer; as well as many nieces, nephews, and other extended relatives. Judy was preceded in death by her parents, Felix and Hilda Vogl; her sister, Joan Malone; and her brothers, Paul Vogl, Felix Vogl Jr., David Vogl and Bill Vogl; and her father and mother-in-law Charles and Ann Muhlbauer.

A recording of Judy's service can be found at this link: https://youtu.be/VmWf-Ll-3GE. Judy L. Muhlbauer, 76 of Halbur, died Wednesday, December 16, 2020 at Accura Healthcare of Carroll. A private family Funeral Mass will be celebrated at 10:30... View Obituary & Service Information

The family of Judy L. Muhlbauer created this Life Tributes page to make it easy to share your memories.

A recording of Judy&#39;s service can be found at this link: https://youtu.be/VmWf-Ll-3GE.

Send flowers to the Muhlbauer family.