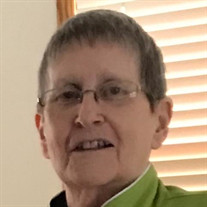 Judy Ziegmann, 72 of Carroll, died Sunday, May 13, 2018 at St. Anthony Regional Hospital in Carroll. Mass of the Christian Burial will be celebrated at 10:30 a.m. Thursday, May 17, 2018 at Sacred Heart Catholic Church in Templeton. The Celebrant will be Fr. Steve Brodersen. Music will be by Jeanne Kerkhoff and the Sacred Heart Men’s Choir. Mass servers will be Grace Tigges, and Laci Cockrum. Madelyn Bauer, Megan Bauer, Victoria Bauer, Haley Heithoff, and Annabelle Neal will be the lectors for the funeral mass. Morgan Bauer, Griffin Bauer, Vanessa Bauer, and Olivia Neal will present the offertory gifts. Eucharistic Ministers will be Doug and Pat Bass, and Trish Tigges. Casket Bearers will be Andy Stevens, Nick Stevens, Jay Riesberg, Jenny Behrens, Max Heithoff, Noah Bauer, Alexander Neal, and Sarah Stevens. Burial will be in the parish cemetery. The Carroll Catholic Daughters of the Americas, and the St. Anthony Hospital Auxiliary will form and honor guard for the funeral mass. Friends may call at the Sharp Funeral Home in Carroll, after 4 p.m. on Wednesday where there will be a Catholic Daughters of the Americas Rosary prayed at 5 p.m., and a Christian Wake Service will be held at 7 p.m. Additional visitation will be held on Thursday morning from 9:30 to 10:15 a.m. at Sacred Heart Church in Templeton. Memorials may be left at the funeral home or at the church to be directed to the Kuemper Catholic School Foundation. Funeral arrangements are under the direction of the Sharp Funeral Home in Carroll, and online condolences may be left for Judy’s family at www.sharpfuneral.com. Judith, the daughter of Nick and Julia (Kleespies) Goetzinger, was born on August 2, 1945 in Templeton, Iowa. She grew up in Templeton, and attended school at Sacred Heart School. Judy then attended Kuemper Catholic High School where she graduated in 1963. Following her formal education Judy attended St. Joseph’s School of Nursing in Sioux City. Upon her graduation she worked as a R.N. at St. Anthony Hospital in Carroll. On May 17, 1969 Judy was united in marriage to Dennis Bauer at Sacred Heart Catholic Church in Templeton. They made their home in Templeton where Judy would establish, and run her own in-home daycare for over 43 years. Denny passed away on December 6, 1991. On April 25, 1997, Judy was united in marriage to Clarence Ziegmann at Sacred Heart Catholic Church in Templeton. Judy enjoyed volunteering, and was very giving of her time. She was one of the first groups of Templeton’s First Responders, a 15 year Councilwoman for the City of Templeton, and Chair of the Kuemper Phone-a-thon for 18 years. She also enjoyed cheering on any and every Kuemper Activity. She was a member of Holy Spirit Catholic Church in Carroll, and a former member of Sacred Heart Catholic Church in Templeton. Judy will be remembered for her strong faith, and being a selfless, positive person. Judy is survived by her husband of 21 years Clarence Ziegmann of Carroll; her children: Mark (Melanie) Bauer of Templeton and their children: Madelyn and Megan; Doug Bauer of Lidderdale, and his children: Victoria and Vanessa; Jill (Randy) Heithoff of Roselle, and their children: Max and Haley; Jeff (Alison) Bauer of Carroll, and their children: Noah, Morgan, and Griffin; Mary (Chris) Neal of Marion, and their children: Alexander, Annabelle, and Olivia; Jean Riesberg of Maple River, and her children: Jay Riesberg, and Jenny Behrens; Pat Stevens of Ankeny, and her children: Andy, Sarah, and Nick. Her step-children: Monda (Stewart) Duncan of Florida, and their children: Malinda, William, and Katie; Cathy (Dave) Pederson of Minnesota, and their children: Michael and Jake; Beth (Justin Larson) Ziegmann of Des Moines, and their son Graceson. Also surviving is her brother, Jim Goetzinger of Darien, IL, as well as many nieces, nephews, and other extended relatives. Judy was preceded in death by her parents, Nick and Julia Goetzinger, her first husband Denny Bauer; her siblings: Marvin (Marilyn) Goetzinger, Dorothy (Don) Stevens, Kate (Ken) Frank; a sister-in-law: Mary Goetzinger; nephew: Dan Stevens, and nephew-in-law: Jim Riesberg.

Judy Ziegmann, 72 of Carroll, died Sunday, May 13, 2018 at St. Anthony Regional Hospital in Carroll. Mass of the Christian Burial will be celebrated at 10:30 a.m. Thursday, May 17, 2018 at Sacred Heart Catholic Church in Templeton. The Celebrant... View Obituary & Service Information

The family of Judith Ziegmann created this Life Tributes page to make it easy to share your memories.

Send flowers to the Ziegmann family.