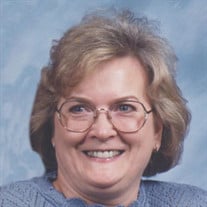 Judith Ann Bretey, age 76, of Carroll, died Saturday, April 23, 2022 at St. Anthony Nursing Home in Carroll. Mass of the Christian Burial will be celebrated at 10:30 a.m. Thursday at St. Lawrence Church – St. John Paul II Parish in Carroll. Music will be by Kathy Halbur. Gift Bearers will be Josh Langel, Autumn Fortner, and Madisyn Bretey. Casket Bearers will be Judy’s grandchildren. Burial will be in Carroll City Cemetery. Visitation will be held from 5-7 p.m. on Wednesday at the Sharp Funeral Home in Carroll. A Christian Wake Service will be held at 7 p.m. The casket will be moved to St. Lawrence Church on Thursday morning where visitation will resume from 9:30 a.m. to 10:15 a.m. In Lieu of Flowers, a memorial fund has been established in Judy’s name and memorials may be left at the funeral home or at the church. Funeral arrangements are under the guidance of the Sharp Funeral Home in Carroll and online condolences may be left for Judy’s family at www.sharpfuneral.com Born on December 6, 1945 in Denison, Iowa, Judith Ann was the daughter of William and Helma (Krueger) Ladwig. Judy attended multiple schools through 3rd grade until she attended school in Ute (4th grade). After Ute she went to a country school in the Denison area from 4th to 8th grade. Judy graduated high school from Denison Community Schools in 1964. On September 11, 1965, Judy was united in marriage to Gene Raymond Bretey at St Mary’s Catholic Church in Dow City. Judy was confirmed/baptized to the catholic faith in Denison in 1967. The couple lived in Dunlap and Denison before making their home in Carroll in 1974. They celebrated their 25th Anniversary with a dance at the Arcadia American Legion Hall. While in high school Judy worked at Cronks Cafe and the bowling alley in Denison. After she graduated high school Judy worked at Hyde’s five and dime store then she worked at the Crawford County Hospital as a ward secretary. Judy worked as a waitress at Pizza Hut when they moved to Carroll then she became a stay-at-home mom after their third child was born. When their kids were young Judy enjoyed riding bikes with them to the high school. Judy also joined an afternoon women’s bowling league in the early 80s. Judy enjoyed camping and riding the ATV trails at Cloud 9 Ranch in Caulfield, Missouri. Judy was a loving mother and especially enjoyed spending time with her grandchildren. Judy loved to cook, play cards, and enjoyed planning games for her grandkids. She was known for her beautiful smile and telling jokes. She was diagnosed with M.S. in 1988 and in 2003 a breast cancer survivor. How she lived her life with her disability was a true inspiration to us all and a constant reminder to enjoy the simple things in life. Left to cherish her memory include her three children: Tina (Mike) Allen of Carroll, Tammy (Curt) Langel of Carroll, and Travis (Maria) Bretey of Carroll; ten grandchildren: Brooke and Autumn Fortner, Nick, Megan and Josh Langel, Micaela, Tyler, Katelyn, Carter, and Madisyn Bretey; her siblings: Larry Ladwig of Phoenix, AZ, Bill Ladwig of McPherson, KS, Gary (Nancy) Ladwig of Charter Oak, Carol Reis of Carroll, Donna Ladwig of Carroll, and Debra (Adam) Lahlou of Centennial, CO; her brothers-in-law and sisters-in-law: Maralee Ladwig of Savage, MN, Lois (Paul) Shook of Denison, Gerald (Karen) Bretey of Clive, Leroy Bretey of Omaha, NE, and Bill (Mary) Bretey of Fairmont, MN, as well as many nieces and nephews, and other extended relatives. Judy was preceded in death by her parents, her husband Gene, her brother, Glen Ladwig, brother-in-law, Gale Reis, brother-in-law, John Bretey, sister-in-law Annie Ladwig, sister-in-law, Marcia Bretey, sister-in-law Patty Bretey, brother-in-law Dale Bretey, her father-in-law Leslie Bretey, and her mother-in-law Bernice Bretey.

The family of Judith Bretey created this Life Tributes page to make it easy to share your memories.

Send flowers to the Bretey family.