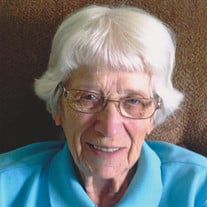 Joyceline “Joy” Heinrichs, age 91, of Maple River, died Friday, June 8, 2018 at Accura Health Center in Carroll. Mass of the Christian Burial will be celebrated at 10:30 a.m., Wednesday, June 13, 2018 at St. Lawrence Catholic Church in Carroll. The celebrant will be Fr. Kevin Richter. Music will by Kate Cuddy, and the St. Lawrence Choir. Lector will be Wayne Tigges. Gift Bearers will be Angie Tigges and Josh Tigges. Eucharistic Minister will be Audrey Siepker. Honorary Casket Bearers will be Jennifer Plehall, Angie Baack, Ashley Earll, Alicia Heinrichs, Rachel Onken, Roxie Wittry, Allison Heinrichs, and Jessie Langel. Casket Bearers will be Mick Riesberg, Curt Langel, Bryan Smouse, C.J. Riesberg, Troy Langel, Tom Smouse, Ross Wittry, and Tom Heinrichs. Burial will be at St. Francis Cemetery in Maple River. Friends may call at the Sharp Funeral Home in Carroll, after 4 p.m. on Tuesday where there will be a Rosary prayed at 5 p.m., and a Christian Wake Service will be held at 6:30 p.m. Additional visitation will be held at St. Lawrence Church from 9:30-10:15 a.m. Wednesday morning. Funeral arrangements are under the direction of the Sharp Funeral Home in Carroll, and online condolences may be left for Joy’s family at www.sharpfuneral.com. Joyceline “Joy” Heinrichs was born on September 18, 1926 in Panama, Iowa to Leo and Anna (Muell) Mahlberg. She attended school in Panama and while in high school she was a starter on the girls’ basketball team for all four years. She graduated in 1943. Joy then enrolled in the Army Corp of Nursing Academy at St. Bernard’s Hospital in Council Bluffs, graduating as a Registered Nurse. World War II ended prior to her graduation, so Joy continued her nursing at St. Bernard’s Hospital. Joy married Edward Heinrichs on May 18, 1948 at Panama, Iowa; to this union 8 children were born. The couple made their home in Carroll before moving to Maple River, where Joy continued her nursing at St. Anthony Hospital, and later the Carroll Health Center. Joy enjoyed playing cards, socializing, and having her grandchildren, and great-grandchildren visit. She was a member of St. Francis Parish in Maple River, after the closing of the parish, she was a member of St. Lawrence Parish in Carroll. Joy is survived by her 8 children: Sandie (Keith) Koehler of Urbandale, Shirley Langel of Manning, Susan (Dennis) Conway of Marion, Scott (Cindy) Heinrichs of Breda, Sharla (Whitney) Bluml of Arcadia, Sara Wittry of Carroll, Sam Heinrichs (and partner Mohamed Hussein) of Altadena, CA, and Steven Heinrichs of Maple River. She is also survived by 15 grandchildren, 18 great-grandchildren; her brother Neil (Charlene) Mahlberg of Harlan; brother-in-law: Don Keane of Panama; sisters-in-law: Irene Glenn of Oskaloosa, and Jean Heinrichs of Spencer; as well as many nieces, nephews, other extended relatives and friends. Joy was preceded in death by her husband, Edward in 2001, granddaughter Josie Klunder; sisters: Alice (Loren) Weihs, Renee (Al) Heinrichs, Ethel (Gerald) Schaefer, Virginia Mahlberg, and Irmine Keane.

The family of Joyceline "Joy" Heinrichs created this Life Tributes page to make it easy to share your memories.