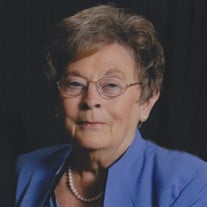 Joyce Bohling, age 83, of Carroll, died Wednesday, July 25, 2018 at St. Anthony Nursing Home in Carroll. Mass of the Christian Burial will be celebrated at 10 a.m. Wednesday, August 1, 2018 at St. John Paul II Parish – Holy Spirit Church in Carroll. The Celebrant will be Fr. James Tigges. Music will be by Barb McDermott and the Holy Spirit Choir. Lectors will be Michelle (Fangman) Uthe, Lisa Schmitz, and Melanie Hill. Gift Bearers will be Joyce’s grandchildren: Brooklyn, Bentley, Mackenzie, T.J., Kylie, and Lukas Bohling, and Madison Vogel. Eucharistic Minister will be Mary Lou Reiman. Casket Bearers will be Jim Mosman, Mark Mosman, Tim Bohling, Todd Bohling, Kevin Lubischer, Kyle Lubischer, Dan Naberhaus, and Brian Schmitz. Burial will be in Mt. Olivet Cemetery in Carroll. Friends may call at the Sharp Funeral Home in Carroll after 4 p.m. on Tuesday, there will be a Rosary prayed at 5 p.m., and a Christian Wake Service will be held at 6:30 p.m. The casket will be moved to Holy Spirit Church on Wednesday morning where visitation will resume from 9 – 9:45 a.m. Funeral arrangements are under the direction of the Sharp Funeral Home in Carroll, and online condolences may be left for Joyce’s family at www.sharpfuneral.com. Born on September 14, 1934 in Alta, Iowa, Joyce Marie was the daughter of Lawrence and Teckla (Ricken) Fangman. At a young age, her family moved to Carroll where she attended school, and graduated from St. Angela’s Academy in 1953. After high school, Joyce worked for Commercial Savings Bank for many years. On July 11, 1969, she was united in marriage to William “Bill” Bohling at St. Joseph’s Catholic Church in Carroll. The couple moved to Somers Point, New Jersey, where their sons, Jeff and Mike were born. In 1974, they moved back to Carroll, and five years later their daughter, Karla was born. Joyce devoted this time in her life to raising her children. Later in life she began working at Lind-Waldock & Co in Carroll, and remained there until retirement. Joyce enjoyed traveling, flowers, reading, and spending time with her family and friends. Joyce is survived by her children: Jeffrey (Jennifer) Bohling of Potomac, MD, Michael (Kim) Bohling of Dallas, TX, and Karla (Doug) Vogel of Ankeny; her grandchildren: Emily Schlosser, Trent Schlosser, Tyler Schlosser, Brooklyn Bohling, Bentley Bohling, Mackenzie Bohling, T.J. Bohling, Kylie Bohling, Lukas Bohling, and Madison Vogel; also surviving is her sister Darlene Mosman of Boone; her sisters-in-law: Mary Kay (Joe) Sporrer of Dedham, Ruth (Pat) Lubischer of Omaha, NE, and Charlene Bohling of Richardson, TX, as well as many nieces, nephews, and other extended relatives. Joyce was preceded in death by her parents, Lawrence and Teckla Fangman, her husband Bill on January 3, 2014, and her brother Eldon Fangman.

The family of Joyce Bohling created this Life Tributes page to make it easy to share your memories.

Send flowers to the Bohling family.