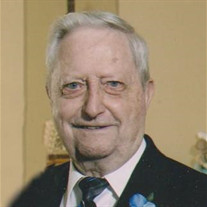 Joseph H. Tigges, Jr., age 89, of Dedham, died Saturday, July 29, 2017, at the Friendship Home in Audubon, Iowa. Mass of the Christian Burial will be celebrated at 10:30 a.m. Friday, August 4, 2017 at St. Joseph Catholic Church in Dedham. The Celebrant will be Fr. John Gerald, assisted by Deacon Louis Meiners. Music will be by Cindy Bauer and the St. Joseph Choir. Lector will be Joe’s granddaughter, Sarah Morrison. Gift Bearers will be Joe’s Granddaughters: Gina Wiges, Sarah Morrison, Megan Bonney, Kalli Wilder, Chelsea McCool, Katie Boehm, Alyssa Tigges, Hannah Tigges, and Breanna Klein. Eucharistic Ministers will be Kalli and Matt Wilder. Casket Bearers will be Joe’s Grandsons: Cory Tigges, Tyler Meaike, Bruce Boehm, Jr., Adam Klein, Shawn Klein, and Riley Klein. Burial will be in the parish cemetery with military honors conducted by the Dedham American Legion. Friends may call at the Sharp Funeral Home in Carroll, after 4:30 p.m. on Thursday. There will be a Rosary prayed at 5 p.m., and a Christian Wake Service will be held at 7 p.m. The casket will be moved to St. Joseph Church on Friday morning, where visitation will resume at 9:30 a.m., and continue until the time of the funeral mass. Funeral arrangements are under the direction of the Sharp Funeral Home in Carroll, and online condolences may be left for Joe’s family at www.sharpfuneral.com. Born on July 15, 1928, at his home near Dedham, Iowa, Joseph Henry is the son of Joseph Sr., and Anna (Brauckman) Tigges. He attended school at St. Joseph’s in Dedham. On September 26, 1950 Joseph was united in marriage to Freda Grossman at St. Mary’s Catholic Church in Willey, with the Rev.H.J. Dries officiating. To this union 6 children were born: Dale Tigges, Ron Tigges, Carolyn Boehm, Jeanne Meaike, Julie Klein, and Jamie Tigges. Joe and Freda started their marriage with Joe being inducted into the United States Army on January 2nd, 1951, where he proudly served his country during the Korean Conflict. He was honorably discharged on December 29, 1952. Joe served proudly but couldn’t wait to get home to his bride and new son, Dale. After working for various farmers, and at Snappy Popcorn in Breda, he rented a farm south of Dedham to raise his family until 1967 when they bought a farm near Viola Center. Joe worked hard raising grain and livestock; taking great pride in the care of the land, his John Deere machinery and the home place. Never one to take a day off, he made sure his family attended mass and then relaxed at family gatherings or playing Euchre with his friends. After retiring from farming in 1989 Joe and Freda built a new house on the south edge of Dedham where he “supervised” Dale farming his land as he had taught him through the years. Family gatherings in Dedham with good food, grandkids and great-grandkids on his lap and keeping up with Freda was now his hobby. As Alzheimer’s progressed he kept his witty comebacks surprising family and nursing home staff with “zingers” but also reminding everyone that he had the best “wiffy” in the world, and he loved her so very much. His earthly struggles are now over and he is together again with the love of his life and reunited with his sons Dale and Jamie. He was a member of the Dedham American Legion for over 65 years, a 4H leader for many years, and a member of St. Joseph’s Parish in Dedham. Joe is survived by his children: Ron Tigges of Lake Forest, CA, Carolyn Boehm (and friend Scott Olson) of Audubon, Jeanne Meaike (and friend Tom Meiners) of Audubon, Julie (Harlan) Klein of Neola; daughters-in-law: Bonnie Tigges of Audubon, and Jean Tigges of Adel; 15 grandchildren; 19 great-grandchildren; siblings: Edward Tigges of Carroll, and Don (Marlene) Tigges of Carroll; sisters-in-law: Imelda Kerkhoff of Manning, Delores (Jim) Greenwood of Cottage Grove, MN, Marilyn (Wayne) Heithoff of Urbandale, and Lorena Grossman of Carroll; as well as many nieces, nephews, and other extended relatives. Joe was preceded in death by his wife Freda on January 2, 2016; sons: Dale Tigges, and Jamie Tigges; a son-in-law Lenord Meaike; his parents: Joseph Sr., and Anna Tigges; siblings: Leonard (Margie) Tigges, Art (Lavine) Tigges, Alma (Ray) Klocke, Allie (Wanda) Tigges, Tina (Norb) Van Dyke, and Lillian Tigges in infancy; his parents-in-law: Bernard and Mary Grossman; his sisters-in-law, and brothers-in-law: Rita Tigges, Marie (Bill) Thielen, Louis (Marian) Grossman, Bob Grossman, Helen (Charles) Thielen, Meryl Kerkhoff, and Lucy Anna Grossman, and Andrew Grossman both in infancy.

The family of Joseph Tigges created this Life Tributes page to make it easy to share your memories.