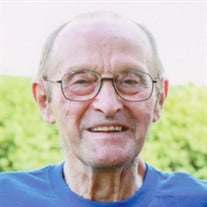 Joseph R. Sporrer, age 90, of Dedham, died Wednesday, March 2, 2022 at Regency Park Nursing Home in Carroll. Mass of the Christian Burial will be celebrated at 10:30 a.m. Monday at St. Jospeh’s Catholic Church in Dedham. The Celebrant will be Fr. Kevin Richter, assisted by Deacon Louis Meiners. Music will be by Cindy Bauer and the St. Joseph’s Choir. Lector for the Funeral Mass will be Emma Hulse. Gift Bearers will be Joe’s grandchildren. Casket Bearers will be Lyle Sporrer, Jeff Sporrer, Brad Irlbeck, Marlo Trecker, Mike Sporrer, and Dave Sporrer. Burial will be in the parish cemetery with military honors conducted by the Dedham American Legion. Visitation will be held from 3-5 p.m. on Sunday at the Sharp Funeral Home in Carroll. A Rosary will be prayed at 5 p.m. The casket will be moved to St. Jospeh’s Church in Dedham on Monday morning where visitation will resume from 9:30 to 10:15 a.m. Funeral arrangements are under the guidance of the Sharp Funeral Home in Carroll, and online condolences may be left at www.sharpfuneral.com. Joseph R. Sporrer was born on November 25, 1931, the son of Joseph A. and Rose (Sextro) Sporrer. He attended St. Joseph’s School and later served in the United States Army from 1954-1956. Following his honorable discharge he returned to the Dedham area. On June 23, 1962, Joe was united in marriage to Mary K Bohling at St. Lawrence Catholic Church in Carroll. Joe and Mary K made their home on the Sporrer Family Century Farm where he was engaged in grain and livestock farming his entire life. Joe loved the farm life, his dog, horses, and the countless family memories from the farm. Sunday afternoons were often spent playing ball in the yard and Sunday drives that ended with ice cream. Joe was a member of Pork Producers, St. Joseph’s Church, and loved spending time with his kids and grandkids. Joe is survived by his children: Carol Sporrer of Urbandale, Pat (Janel) Sporrer of Dedham, Art (Dianne) Sporrer of Ft. Dodge, Glen Sporrer of Dedham, Connie (Barry) Hulse of Grimes, Ann Sporrer of Dedham, and Kris (Chad) Campbell of Grimes; 10 grandchildren: Elizabeth (Tom) Hofmeister, Isaiah Sporrer, and Samantha Sporrer all of Wisconsin, Lindsey Sporrer and Rachel Sporrer both of Ft. Dodge, Emma Hulse, Macie Hulse, Kelson Campbell, and Jacob Campbell all of Grimes, and Garret Sporrer of Dedham; 1 great grandchild: Harper Hofmeister of Wisconsin; his brother, Harold (Rita) Sporrer of Manning; his sister-in-law, Ruth (Pat) Lubischer of Kansas; nieces, nephews, other family members, and friends. Joe was preceded in death by his parents; his wife Mary K in 2021; his son Joseph in 2007; his siblings: John, Leonard, Clarence “Doc” Sporrer, Mary Trecker, Arlene Kasperbauer, Alma Forke, Sally Heithoff, and Rose Hacker.

The family of Joseph Sporrer created this Life Tributes page to make it easy to share your memories.