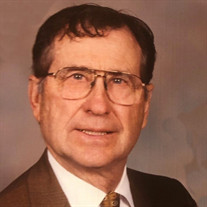 Joseph W. Schmitz, age 92, of Willey, died Friday, November 01, 2019 at Regency Park Nursing Home in Carroll. Mass of the Christian Burial will be celebrated at 10:30 a.m. Tuesday, November 5, 2019 at St. Mary’s Catholic Church in Willey. The celebrant will be Fr. Kevin Richter. Con-Celebrant and Homilist will be Fr. Randy Schon. Music will be by Jane Heithoff and the St. Mary Choir with Joe Ascherl as soloist. Lector will be Dorene Francis. Gift Bearers Erin Francis, Haley Lux, and Evan Huberty. Eucharistic Ministers will be Debra Vogl, and Darlene Huberty. Casket Bearers will be Joseph Policky, Brian Schmitz, Eddie Vogl, Nathan Schmitz, Collin Ascherl, David Francis, Michael Lux, and Alex Huberty. Burial will be at 2 p.m. Tuesday at Mt. Olivet Cemetery in Carroll. Friends may call at the Sharp Funeral Home in Carroll after 4 p.m. on Monday, where there will be a Knights of Columbus Rosary prayed at 5 p.m., and a Christian Wake Service will be held at 6:30 p.m. The casket will be moved to St. Mary’s Parish Hall on Tuesday morning where visitation will resume from 9:30 a.m. to 10:15 a.m. Funeral arrangements are under the guidance of the Sharp Funeral Home in Carroll, and online condolences may be left for Joseph’s family at www.sharpfuneral.com. Joseph, the son of Henry and Sophia (Hansman) Schmitz, was born on July 23, 1927 in Carroll, Iowa. He grew up on the family’s century farm, attended country school, and Sts. Peter and Paul School. On January 24, 1951, Joseph was united in marriage to Esther Niehus, at St. Mary’s Catholic Church in Remsen, Iowa. Joseph was a life-long farmer over the years he has raised both grain and livestock. Conservation was important to him, and he was one of the first farmers in the area to farm with terraces to prevent erosion. Joseph was very active in the community where he was involved in the Knights of Columbus, Elks Club, 4H Leader for 24 years, Carroll County Democratic Party Chairman, Kuemper Parents Club, Iowa State Extension Council Chairman, Beef Producers and Pork Producers. Family, Farming, Politics, and Conservation were important to Joseph. Joseph was a member of St. Mary’s Parish in Willey. Left to celebrate his life is his wife of over 68 years Esther Schmitz of Willey; eight children: Diane (Jim) Policky of Omaha, Dan (Karen) Schmitz of Carroll, Debra (Edward) Vogl of Arcadia, Doan Schmitz of Ames, Dorene (Joe) Francis of Williamsburg, Donna (Joe) Ascherl of Triangle, VA, Denise (Greg) Lux of Carroll, and Darlene (Bill) Huberty of Mitchellville; 25 grandchildren; 9 great-grandchildren; his sister Dorothy Judge of Denver, CO; and sisters-in-law Carole Voss of Cherokee, and Peg Niehus of Remsen; as well as many nieces, nephews, and other extended family members. Joseph was preceded in death by his parents; his siblings: Leonard, Hilbert, Mildred, Charles, Raymond, Morris, Lester, Le Roy, Ramona, and Mary, and Stanley both in infancy.

The family of Joseph W. Schmitz created this Life Tributes page to make it easy to share your memories.

Send flowers to the Schmitz family.