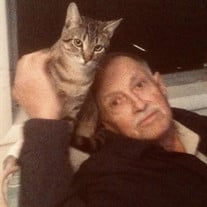 Joseph Claude Polking (Joe) of Charleston, SC, died peacefully on June 8, 2018, at MD Anderson Cancer Center in Houston, Texas, surrounded by loving family. He was 79 years young. Joe is predeceased by his parents, Clement and Anna Polking of Breda, Iowa, and his brother Bill, of Carroll, Iowa. His beloved oldest brother, Jim, only recently departed this life on March 19, 2019. He is survived by his irascible wife and friend, Lynn Strickland; brother John (wife Stevie Coppin), Paul (wife Joan) and sister-in-law Peggy, widow of brother Bill; and a multitude of wonderful nieces, nephews and friends. That Joe is survived by several adoring feline companions is an understatement – he cared for and cherished them all, for which Lynn is forever grateful! Joe was an undergraduate of Notre Dame University in South Bend, Indiana, and earned his JD from Catholic University in Washington, DC. His professional career was spent at the Federal Maritime Commission in Washington, DC, where he rose over his 30 - plus years of federal service from staff attorney to Secretary of the Commission. Joe was most often described as a “gentle soul,” and he was. He loved the Washington Redskins, golf, and, more recently, the Washington Nationals, in that order. He followed his teams faithfully until the day before he died and will probably continue to do so wherever he is now. Joe was slow to anger, quick to forgive, lived in the present and loved large. He will be greatly missed. A funeral mass to celebrate Joe’s life, and his brother James Polking, will be held at 10:30 a.m., Thursday, May 30, 2019 at St. Bernard’s Catholic Church in Breda. Burial will be in St. Bernard’s Cemetery in Breda. Visitation will begin at St. Bernard’s Church in Breda after 5 p.m. on Wednesday, May 29, 2019 with a Christian Wake Service at 7 p.m. Additional visitation will be held one hour prior to services on Thursday at the church. Following the burial at St. Bernard’s Cemetery please join the Polking families at the Breda American Legion Hall for a luncheon. Funeral arrangements are under the direction of the Sharp Funeral Home in Breda and online condolences may be left for the Polking families at www.sharpfuneral.com. For those wishing to provide memorials, the family suggests the Animal Rescue League Iowa, Inc., Attn: Donations, 5452 NE 22nd St., Des Moines, IA 50313-2528, in Joe’s name, and the Iowa Veteran’s Home, 1301 Summit St., Marshalltown, IA 50158, in Jim’s name.

The family of Joseph Polking created this Life Tributes page to make it easy to share your memories.

Send flowers to the Polking family.