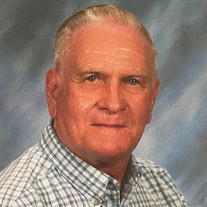 Joseph Neil Mueggenberg, 79 of Lincoln, Nebraska and formerly of Vail, Iowa, died Thursday, December 14, 2017 at The Heritage of Overland Park in Overland Park, Kansas. Mass of the Christian Burial will be celebrated at 10:30 a.m. on Wednesday, December 20, 2017 at St. Bernard’s Catholic Church in Breda. Burial will be in the parish cemetery. Visitation will be held from 5 to 7 p.m. on Tuesday at the Sharp Funeral Home in Breda. A Christian Wake Service will be held 6:30 p.m. Visitation will resume at the funeral home on Wednesday morning from 9:30 a.m. to 10:15 a.m. Funeral arrangements are under the direction of the Sharp Funeral Home in Breda, and online condolences may be left for Joseph’s family at www.sharpfuneral.com. Joseph was born on October 2, 1938 in Breda, Iowa, the son of Joseph and Margaret (Irlbeck) Mueggenberg. He attended St. Bernard’s Catholic High School, graduating in 1956. He was a successful farmer who showed the values of working hard and providing help to others before they need to ask. He logged many miles as a truck driver, and Crusaders Tour Bus operator who brought many smiles across the states, and to the Creighton sports teams. Upon his retirement, he moved to Lincoln, Nebraska. He was a loving father, and devoted grandfather. He was most proud of his Catholic faith, family and his farm. Joseph enjoyed driving, traveling, fishing, walking, bowling, and dancing. Music was an important aspect of his life. Joseph was often heard singing a tune. Joseph is survived by his daughters, and sons: Janet, Julie Jeanne, Jim, and Jeff. He has three grandsons: Jalen, Luke, and Lance. Joseph was preceded in death by his parents, Joseph and Margaret Mueggenberg, and siblings: Vernon Mueggenberg, and Darlene Brincks. Joseph lived a full life. We are sad the dancing shoes are put aside, the fishing poles are stowed away, and the roads are now less traveled. His presence will be missed.

Joseph Neil Mueggenberg, 79 of Lincoln, Nebraska and formerly of Vail, Iowa, died Thursday, December 14, 2017 at The Heritage of Overland Park in Overland Park, Kansas. Mass of the Christian Burial will be celebrated at 10:30 a.m. on Wednesday,... View Obituary & Service Information

The family of Joseph Mueggenberg created this Life Tributes page to make it easy to share your memories.

Send flowers to the Mueggenberg family.