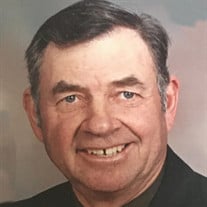 Joseph “Dean” Berg, age 83, of Arcadia, died Saturday, February 10, 2018 at St. Anthony Nursing Home surrounded by his family. Mass of the Christian Burial will be celebrated at 10:30 a.m., Thursday, February 15, 2018 at St. John’s Catholic Church in Arcadia. The celebrant will be Fr. Mark Stoll. Con-celebrant will be Fr. Richard Remmes. Music will be by Sharon Bierl, and the St. John’s Choir. Gift Bearers will be Michael and Katie Killeen, and Erin Killeen and Ryan Maddox. Lector will be Peg Scheidt. Eucharistic Ministers will be Tom and Julie Eich. Casket Bearers will be members of the Arcadia American Legion. Burial will be in the parish cemetery with military honors conducted by the Arcadia American Legion. Friends may call at the Sharp Funeral Home in Carroll, after 4 p.m. on Wednesday. There will be a rosary prayed at 5 p.m., and a prayer service will be held at 7 p.m. Visitation will resume at the funeral home in Carroll from 9-945 a.m. Thursday morning. Funeral arrangements are under the direction of the Sharp Funeral Home in Carroll, and online condolences may be left for the family at www.sharpfuneral.com. Born on August 21, 1934 in Carroll County, Iowa, Joseph Dean was the son of Joseph H. and Christine (Leiting) Berg. He grew up northwest of Arcadia, and attended St. John’s School. After his formal education, Dean enlisted in the United States Army, where he proudly served his country during the Korean Conflict. Upon his honorable discharge he returned to the Arcadia area where he worked in construction, and operated a grain, hog, and cattle farming operation. On June 30, 1972, Dean was united in marriage to Linda Wittrock Killeen at St. Lawrence Catholic Church in Carroll. The couple made their home near Arcadia where Dean continued to farm. His passion in life was farming, and took pride in caring for the land, and the animals. In addition he enjoyed bowling in his earlier years. He was a member of St. John’s Parish in Arcadia, and a more than 50 year member of the Arcadia American Legion. Left to celebrate his life is his wife: Linda Berg of Arcadia; son Bradley (Jean) Killeen of Olathe, Kansas; grandchildren: Michael (Katie) Killeen of Kansas City, Missouri, and Erin (fiancé Ryan Maddox) Killeen of Manhattan, Kansas; siblings: Norma Goecke of Carroll, Gerald (Marie) Berg of Arcadia, Vern (Pat) Berg of Arkansas, Jim (Paulette) Berg of Arcadia, and Helen (Ron) Sundrup of Arcadia; sisters-in-law: Louanye (Kenneth) Mueggenberg of Carroll, Pat (Bill) Stammerman of Dallas Center, and brother-in-law: Florian (Diane) Wittrock of Carroll; as well as many nieces, nephews, and other extended relatives. He was preceded in death by his parents, son William Berg on March 3, 2017; his brothers: Robert Berg, Don (Ardella) Berg, Ron (Lorna) Berg; brother-in-law: Jerry Goecke, sister-in-law: Gloria Jean Wittrock, and his parents-in-law: Florian and Elizabeth Wittrock.

The family of Joseph "Dean" Berg created this Life Tributes page to make it easy to share your memories.

Send flowers to the Berg family.