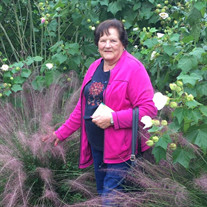 Joleen Heinrichs, 80 of Carroll, died Thursday, July 16th at her home in Carroll, Iowa with her children by her side. Mass of the Christian Burial will be celebrated at 10:00 a.m. Monday, July 20, 2020 at Holy Spirit Catholic Church in Carroll. The Celebrant will be Fr. Kevin Richter. Music will be by Jane Heithoff as pianist with Sherry Loughran as cantor. Lectors for the funeral mass will be John Burns, Ryan Heinrichs and Devan Heinrichs. Eucharistic Minister will be Joan Badding. Casket Bearers will be Joleen’s grandchildren: John Burns, James Burns, Annie Burns, Ryan Heinrichs, Cassie Heinrichs, Jake Heinrichs, Devan Heinrichs, Andy Heinrichs, Hudson Johns and Harper Johns. Burial will be at 12:30 p.m. Monday in St. Augustine Cemetery in Halbur. Those in attendance of the funeral mass are required to wear a face covering, and practice social distancing. There will be no public visitation prior to the funeral mass on Monday. Visitation will be held from 3 p.m. until 6 p.m. on Sunday at the Sharp Funeral Home in Carroll. Those attending will be asked to abide by COVID-19 social distancing guidelines, and face coverings are recommended. Funeral arrangements are under the guidance of the Sharp Funeral Home in Carroll and online condolences may be left for Joleen’s family at www.sharpfuneral.com. Born on November 26th, 1939, near Halbur, Iowa, Joleen was the daughter of Victor and Viola (Sieve) Hinners. Joleen attended St. Augustine School and graduated from Kuemper Catholic High School, class of 1957. Following high school, she attended Iowa Beauty School in Des Moines. After returning to Carroll she was united in marriage to James Heinrichs on September 10th, 1960 at St. Augustine Catholic Church in Halbur. Jim and Joleen made their home in Carroll where Joleen managed her own in-home beauty salon for over 50 years, as well as worked at the Hy-Vee Floral Shop for over 22 years. Joleen’s greatest joy was found in being surrounded by her seven children and ten grandchildren. She was a loving, patient mother and grandmother who nurtured through grace and kindness. She was the strongest, yet gentlest person, always putting others before herself. She loved to travel, especially to Canada fishing with Jim and her boys, her annual trips with her daughters, and her many trips with her friends. For nearly 50 years, she and Jim rarely missed a weekend night out with their friends where they would enjoy dinner, a few drinks and many laughs. She liked to play cards with her friends, read and put puzzles together. Joleen was an avid gardener with a green thumb and could often be found tending to her beautiful flower garden and plants on her deck. Left to celebrate her life are her children: Lori (Jack) Burns of Algona, IA, Doug Heinrichs of Reno, NV, Kris (Sara) Heinrichs of Sleepy Eye, MN, Kurt Heinrichs of Reno, NV, Beth (Craig) Johns of Reno, NV, and Rachel Heinrichs of Des Moines; 10 grandchildren; her sister, Luanne (Barry) Moeller of Carroll, Lois (Bob) Malvasio of Yorkville, IL, Marilyn (Bobby) Baker of Powhatan, VA, Sandy Dryden of Midlothian, VA, and Daryl (Joyce) Hinners of Carroll; her brother-in-law, Jerry (Pat) Heinrichs of Omaha, NE, and sister-in-law Sally Heinrichs, as well as many nieces, nephews, other extended relatives and many friends. Joleen was preceded in death by her husband James, her son Mark, her parents Victor and Viola Hinners; her parents-in-law: Lawrence and Mary Heinrichs; her brothers-in-law Barry Moeller, Bobby Baker, Melvin Heinrichs, Eugene Heinrichs, LeRoy Heinrichs, and Bill Heinrichs; and her nephews, Jeff Heinrichs and Mitchell Hinners.

Joleen Heinrichs, 80 of Carroll, died Thursday, July 16th at her home in Carroll, Iowa with her children by her side. Mass of the Christian Burial will be celebrated at 10:00 a.m. Monday, July 20, 2020 at Holy Spirit Catholic Church in Carroll.... View Obituary & Service Information

The family of Joleen Heinrichs created this Life Tributes page to make it easy to share your memories.