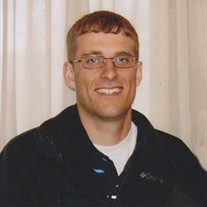 Mass of the Christian Burial for John Vonnahme, age 32 of Arcadia, will be celebrated at 10 a.m. Saturday, January 28, 2017 at St. John’s Catholic Church in Arcadia. The Celebrant will be Fr. Mark Stoll. Fr. Richard Remmes and Fr. John McGuirk will Con-Celebrate the funeral mass. Music will be by Sharon Bierl and the St. John’s Choir. Mass Servers will be: Max Vonnahme, Sam Vonnahme, and Maggie Vonnahme. Lector for the funeral mass will be Danny Wittrock. Gift Bearers will be: Rob Venner, Chase Andersen, and Brian Willenborg. Eucharistic Ministers will be Mary Lueshen and Allison Bramlet. Casket Bearers will be: Eddie Vonnahme, Paul Vonnahme, Joe Vonnahme, Karen Hursh, Scott Vonnahme and John Kreikemeier. Burial will be at St. Ann’s Cemetery near Vail. Friends may call at St. John’s Church in Arcadia after 4 p.m. on Friday, where there will be a Christian Wake Service followed by a Rosary at 7 p.m. There will be no public visitation before the funeral mass on Saturday. In lieu of flowers memorials may be left at the church to be directed to the John Vonnahme Children Education Fund. Funeral arrangements are under the direction of the Sharp Funeral Home in Carroll, and online condolences may be left for John’s family at www.sharpfuneral.com. The story of John Vonnahme’s life began on October 23, 1984. He was born the fourth child to Dave and Jan (Wittrock) Vonnahme. John entered in eternal rest on Wednesday, January 25, 2017 in Carroll, Iowa. After spending his younger years in the Ar-We-Va school district he later graduated from Kuemper High School with the class of 2003. He furthered his education at Iowa State University and received a degree in Construction Engineering. John then accepted a Superintendent position with the Weitz Company in Norwalk, Iowa where he also purchased a house. During the wedding of a friend he met the women who would turn the house into a home and complete him. John and Jenna Kreikemeier were married on June 11, 2011 at St. Mary’s Church in West Point, Nebraska. The Kreikemeier family turned out to be a wonderful loving and supportive addition to all the family. To this marriage welcomed 3 beautiful children: Luke, Grace, and Hope. John loved his role as father and did it very, very well. As we watch the children today and into the future, we take comfort by seeing the little pieces of him-both in their demeanor and the visual features they possess. After spending at brief time in Norwalk and working at Weitz, John and Jenna decided to move closer to family and begin farming. John split his time working with his father and his uncle and learned the many details of running a farm operation. His brothers would often ask if he was happy he chose to move back and the response was always and enthusiastic “YES”. To anyone that knew John well, they find comfort in the fact that John was doing what he truly loved to the end. If there was one aspect of John’s quiet life he can be remembered for it is his selfless personality. This was true no matter what hat he wearing: husband, father, son, brother, friend; the list could go on for days. Whenever someone asked John how he was doing, he always said “good” no matter the internal struggle he was going through and that demeanor lasted through his final days. He didn’t want to burden anyone with his problems no matter how much you wanted him to share. John always put the other person first, and I can imagine now, he’s reading this and wondering why we wrote so much about him. Some would say this story has a tragic ending. He was taken too soon, why did John have to carry this cross? As Jenna so plainly put it, I was expecting to spend 50 or 60 years of my life with him, not 5. John, we love you, we will miss you, but we know that while John’s earthly life may have been too short, death does not conquer, rather Hope lives on in us all. John’s earthly life ended much like it began, surrounded by family members who loved him dearly. Left to cherish his memory is his wife Jenna Vonnahme of Arcadia; his children: Luke, Grace, and Hope, all at home; his parents: Dave and Jan Vonnahme of Westside; his parents-in-law, Kevin and Cherie Kreikemeier of West Point, NE; his maternal grandparents: Fred and Lucille Wittrock of Audubon; his siblings: Eddie (Katie) Vonnahme of St. Charles, Karen (Warren) Hursh of Bennington, NE, Paul (Courtney) Vonnahme of Colfax, Joe Vonnahme of Colfax, and Scott Vonnahme of Wall Lake; his brothers-in-law and sisters-in-law: John (Emily) Kreikemeier of Omaha, NE and Mary (Matt) Lueshen of West Point, NE; as well as many nieces, nephews, aunts, uncles, other extended relatives and many friends. John was preceded in death by his paternal grandparents, Clarence and Caroline Vonnahme. “He has been a servant to his loved ones providing help whenever help was needed. He has had the joy to work the land you created and to realize the beauty of nature. The sunny days, the gift of rain, and the beauty of the goldfinches and bluebirds that live in his pasture.”

Mass of the Christian Burial for John Vonnahme, age 32 of Arcadia, will be celebrated at 10 a.m. Saturday, January 28, 2017 at St. John&#8217;s Catholic Church in Arcadia. The Celebrant will be Fr. Mark Stoll. Fr. Richard Remmes and Fr. John... View Obituary & Service Information

The family of John A. Vonnahme created this Life Tributes page to make it easy to share your memories.

Mass of the Christian Burial for John Vonnahme, age 32 of Arcadia,...

Send flowers to the Vonnahme family.