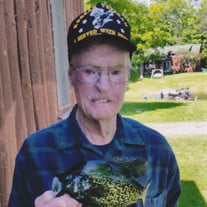 John Sibbel, age 90, of Halbur, died late Thursday evening, July 25, 2019 at St. Anthony Nursing Home in Carroll. Mass of the Christian Burial will be celebrated at 10:30 a.m. Wednesday, July 31, 2019 at St. Augustine Catholic Church in Halbur. The celebrant will be Fr. Timothy Friedrichsen. Music will be by Julie Sibbel and the St. Augustine Choir. Mass Servers will be Carter and Kenna Soppe. Lector will be Carli Sibbel. Gift Bearers will be Mary and Jill Wittrock. Eucharistic Ministers will be Dennis Rutten, Joan Rutten, and Wayne Riesberg. Casket Bearers will be Tim Sibbel, David Sibbel, Jonathan Sibbel, and Chris Johnson. Burial will be in the parish cemetery with military honors conducted by the Arcadia American Legion. Visitation will be held at St. Augustine Church in Halbur from 4 until 7 p.m. on Tuesday. A Christian Wake Service will be held at 5 p.m., and a Templeton Knights of Columbus Rosary will be held at 7 p.m. Visitation will resume at the church in Halbur from 9:30a.m. to 10:15a.m. on Wednesday morning. Memorials may be directed to the Kuemper Catholic High School Wrestling or Baseball Programs. Funeral arrangements are under the guidance of the Sharp Funeral Home in Carroll, and online condolences may be left for John’s family at www.sharpfuneral.com. John Anthony Sibbel, the son of the late John H. and Katherine (Soppe) Sibbel was born on December 18, 1928 in Carroll, Iowa. He grew up near Halbur, and attended St. Augustine School. After his formal education he began farming for his parents. On September 11, 1950 John was united in marriage to Marjorie Riesberg at Sacred Heart Catholic Church in Templeton. The couple made their home south of Halbur, where John continued to farm. On May 9, 1951 John was inducted into the United States Army, he proudly served his country during the Korean Conflict. He was honorably discharged from active service on February 9, 1953. Upon his return home, he resumed his farming operation. John enjoyed farming, and was actively involved until his early eighties. He loved being in the tractor. He played baseball on the local town team during his youth, and later slow pitch softball. He coached many games of parochial baseball. John spent many summer evenings on a lake bank trying to land the “big one”. He also was known for his photography skills. He took pictures at many family weddings, and the Halbur Centennial. His greatest joy was spending time with his grandchildren, and great-grandchildren. And during family get-togethers he enjoyed playing several games of “Pitch”. John served on the Carroll County Farm Bureau Board as president, and board member, and the Carroll County Compensation Board. He was an honorary member of the Templeton Knights of Columbus, and a member of the Arcadia American Legion, Holy Name Society, and St. Augustine Parish. Left to celebrate John’s life is his wife, Marjorie Sibbel of Halbur; children: Diane (Florian) Wittrock of Carroll, Michael (Julie) Sibbel of Halbur, Gerald (Connie) Sibbel of Wanatah, IN, and Kevin Sibbel of Ankeny; son-in-law: John Johnson of Princeton, MO; fourteen grandchildren: Mary, Jill, Nicole (Matt), Adam, Jennifer (Damian), Chris (Jennifer), Kellie, Becky, Tim, Hannah, Carli, David, Jonathan, and Sarah; and nine great-grandchildren. Also surviving is his sister Lorraine Wempe of Halbur; his brothers-in-law, and sisters-in-law: Richard (Mary Jo) Rutten of Carroll, Leon (Marlene) Riesberg of Carroll, Leona Riesberg of Halbur, Dorothy Riesberg of Carroll, and Karen Riesberg of Griswold, as well as many nieces, nephews, and other extended relatives. John was preceded in death by his parents; son, David in 1980; daughter, Sandra Johnson in 2017; sister, Ruth Rutten; his brothers-in-law and sisters-in-law: Clarence Wempe, Catherine (George) Vogl, Dorothy (Raymond) Halbur, Flora (Raymond) Sibbel, Bernice (Leo) Schroeder, Leonard (Phyllis) Riesberg, Irvin Riesberg, Joe Riesberg, Lavern (Stella) Riesberg, and Earl Riesberg

The family of John Sibbel created this Life Tributes page to make it easy to share your memories.

Send flowers to the Sibbel family.