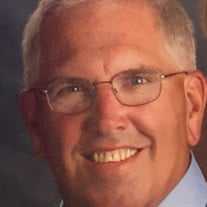 John Greteman, age 70, of Carroll, died Friday, June 3, 2022 at Essentia Health in Deer River, Minnesota. Mass of the Christian Burial will be celebrated at 10:30 a.m. on Thursday, June 9, 2022 at Holy Spirit Church – St. John Paul II Parish in Carroll. The celebrant will be Fr. Kevin Richter. Music will be by Kathy Halbur and Sherry Loughran. Lector will be Conor Greteman. Gift Bearers will be John’s grandchildren: Cambria, Kazik, Morgan, Bristol, Harper, Arielle, and Liam. Eucharistic Minister will be Jim Greteman. Honorary Casket Bearers will be Pat Malloy, Tom Farner, Joel Harris, Fred Dolezal, Jim White and Barry Bruner. Casket Bearers will be Phil Simons, David Sporrer, Doug Irlmeier, Kevin Pietig, Loren Siebrecht, and Jim Greteman. Burial will be in Mt. Olivet Cemetery in Carroll. Visitation will be held at the Sharp Funeral Home in Carroll from 5-7 p.m. on Wednesday where there will be a Christian Wake Service held at 7 p.m. The casket will be moved to Holy Spirit Church on Thursday morning where visitation will resume from 9:30 a.m. to 10:15 a.m. In lieu of flowers memorials may be left at the funeral home or at the church to be directed to the Kuemper Catholic Schools Foundation. Funeral arrangements are under the guidance of the Sharp Funeral Home in Carroll, and online condolences may be left at www.sharpfuneral.com. John was born in Carroll, Iowa on October 30, 1951, to Paul and Norma (Clark) Greteman. John was a proud graduate of Kuemper Catholic Schools and Loras College. On June 6,1981, John married Cindy DeNeve at Holy Spirit Church in Carroll. They had two beautiful children, Mark and Lexie. John was a car salesman for over 30 years at Lou Walsh Motors. John's favorite pastime was golfing with his friends. He enjoyed watching Hallmark movies and would always predict that 20 minutes before the end of the movie there was going to be a big fight. John enjoyed his grandchildren and the babies loved to cuddle with him. He also enjoyed being an announcer at the Merchants baseball games. His favorite team was the Hawkeyes and he liked going to football games with his brothers! Left to cherish his memories is his wife Cindy of Carroll, children: Mark Greteman of Adel and Lexie Carlson of Wall Lake; his son-in-law Jeremy Carlson: his seven grandchildren: Cambria, Kazik, Morgan, Bristol, Harper, Arielle, and Liam; his sister Mary Ann Greteman; his brothers Tom (Paula) Greteman, Frank Greteman, Bernard Greteman, Paul (Robyn) Greteman; parent-in-law :Shirley DeNeve; sister-in-laws: Julie (Art) Helburg and Mary (Bob) Boots, and many nieces and nephews. He was preceded in death by his parents; Paul and Norma Greteman ; his parent-in-law Fred DeNeve; and his nephews Christopher and Ryan Greteman.

The family of John Greteman created this Life Tributes page to make it easy to share your memories.

Send flowers to the Greteman family.