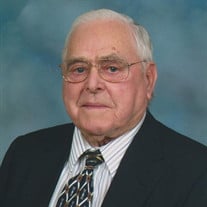 John A. Behrens, 99 of Carroll, died Saturday, February 18, 2017 at St. Anthony Regional Hospital in Carroll. Mass of the Christian Burial will be celebrated at 10:30 a.m., Thursday, February 23, 2017 at St. Lawrence Catholic Church in Carroll. The Celebrant will be Fr. Craig Collison. Con-Celebrant will be Fr. Brian Feller. Music will be by Kate Cuddy and the St. Lawrence Choir. Lector for the funeral mass will be Dan Behrens. Gift Bearers will be John’s daughters: Kathy Grote, Aggie Kitt, and Nancy Reiling. Eucharistic Minister will be Dave Wittrock. Casket Bearers will be John’s sons: Cletus Behrens, Jerry Behrens, Gary Behrens, Wayne Behrens, Daryl Behrens, John E. Behrens, and Artie Behrens. Burial will be in Mt. Olivet Cemetery in Carroll. Friends may call at the Sharp Funeral Home in Carroll after 3 p.m. on Wednesday where there will be a rosary at 4 p.m. by the Carroll Knights of Columbus and a Christian Wake Service at 6 p.m. The casket will be moved to St. Lawrence Church on Thursday morning where visitation will resume at 9:30 a.m. and will continue until time of the funeral mass. Funeral arrangements are under the direction of the Sharp Funeral Home in Carroll and online condolences may be left for John’s family at www.sharpfuneral.com. John was born on October 24, 1917 at Roselle, Iowa, the son of John H. and Elizabeth (Sibbel) Behrens. He attended Holy Angels Catholic School, and was a member of Holy Angels Parish for over sixty-five years. Over the years John served on the Men’s Club, and Knights of Columbus. John was a farmer for forty-two years and retired in Carroll in 1982. John and Beatrice Wittrock were united in marriage on May 7, 1940 at St. Augustine Catholic Church in Halbur, Iowa. They were blessed with seventy-two years of marriage. John enjoyed farming, fishing, visiting family and friends, and helping neighbors. He also enjoyed the morning coffee buddies, playing rummy, and the weekly supper invites to the farm. John is survived by seven sons, and three daughters: Cletus Behrens of Carroll, Jerry Behrens of Denison, Kathy (Walt) Grote of Wall Lake, Aggie (Jim) Kitt of Dedham, Gary (Sue) Behrens of Arnolds Park, Wayne Behrens of Denison, Daryl (Lynne) Behrens of Muscatine, Nancy (Paul) Reiling of Lake View, John E. (Lois) Behrens of Carroll, and Artie (Brenda) Behrens of Maquoketa; thirty-four grandchildren, sixty-nine great-grandchildren, and eight great-great grandchildren. Also surviving are sisters: Mary Ausman of Carroll, and Irene Brincks of Carroll; sisters-in-law: Mildred Sturm of Lake View, LaVerne Wittrock of Carroll, Darlene Wittrock of Halbur; brother-in-law: Earl (Vernell) Wittrock of Carroll. John was preceded in death by his wife, Beatrice in 2012, grandson, John W. Behrens, daughters-in-law: Sandy Behrens, and June Behrens, his parents, his brothers: Lawrence (Justine) Behrens, and Joe (Juletta) Behrens, and a sister Louise Behrens.

The family of John A. Behrens created this Life Tributes page to make it easy to share your memories.