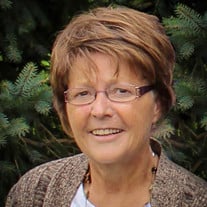 Joan Alma Greving, age 62, of Willey, passed away on Saturday, November 5, 2016 at her home surrounded by her family, after a courageous battle with cancer. Mass of the Christian Burial will be celebrated at 10:30 a.m. on Thursday, November 10, 2016 at St. Mary’s Catholic Church in Willey. The Celebrant will be Fr. Dan Greving. Con-Celebrant will be Fr. Timothy Johnson. Music will be provided by Shelly Schreck and the St. Mary’s Parish Choir. Mass servers will be Alex Klein and Anna Schultes. Lector for the funeral mass will be Jill Dopheide. Gift Bearers will be Jodi Rupiper, Eric Greving, Jared Lahr, and Evelyn Canavan. Eucharistic Ministers will be Jan Handlos and Kris Quandt. Casket Bearers will be Daniel Smith, Nathan Greving, Keith Greving, Justin Dopheide, Andy Hagerty, and Chad Dopheide. Burial will be in the parish cemetery. Friends may call at the Sharp Funeral Home in Carroll after 4 p.m. on Wednesday, where there will be a Rosary at 5 p.m., and a Christian Wake Service at 7 p.m. The casket will be moved to St. Mary’s Parish Hall in Willey on Thursday morning, where visitation will resume at 9:30 a.m. and continue until the time of the funeral mass. In lieu of flowers, memorials may be left at the funeral home or the church for Kuemper Catholic Schools Foundation or Domus Trinitatis, Home of the Trinity. Funeral arrangements are under the direction of the Sharp Funeral Home in Carroll, and online condolences may be left for Joani’s family at www.sharpfuneral.com. Born on September 27, 1954 in Carroll, Iowa, Joani was the daughter of Edwin and Leona (Tunning) Dopheide. She attended Holy Angels Elementary School and later graduated from Kuemper Catholic High School in 1972. Joani attended Bernell College of Cosmetology in Ames and then returned to the Carroll area. On February 23, 1974, she was united in marriage with LaVerne Greving at Holy Angels Catholic Church in Roselle. The couple raised their family on a farm between Willey and Dedham, where Joani was a devoted homemaker and was instrumental in the family’s farming operation. She was also a dedicated employee at Pella Corporation for over 25 years. Joani always enjoyed traveling, being outdoors, quilting, and cooking. She had a deep devotion to her faith. She was active with St. Mary’s Parish and her Sunday Rosary Prayer group. Joani’s greatest joy was spending time with family, especially her kids and grandkids. Left to celebrate her life is her husband Vern Greving of Willey; her children: Gary (Carrie) Greving of San Diego, CA, Jennifer (Jon) Canavan of Milwaukee, WI, John (Shelly) Greving of DeWitt, Scott Greving and fiancé Julie Aldape of Little Rock, AR, Doug (Katie) Greving of Manning, and Kevin (René) Greving of Willey; 11 grandchildren; her siblings: Eugene Dopheide and friend Elaine of Melbourne, Australia, Gerald (Mary) Dopheide of Carroll, Jim (Mary Lou) Dopheide of Carroll, Lois Dopheide of West Des Moines, Randy Dopheide and friend Lori of Scranton, Patty (Larry) Lahr of Carroll, Daryl Dopheide of Carroll, and Linda Hagerty of Altoona, her sisters-in-law and brothers-in-law: Marilyn Dopheide of Roselle, Jerry (Joyce) Greving of Ames, Lois Davies of Deland, FL, Ray (Sharon) Greving of Davenport, Denise (Cal) Smith of Dunkerton, Don (Mary) Greving of Exira, Mary (Dale) Klocke of Carroll, Marty (Gail) Greving of Willey, and Fr. Dan Greving of Mapleton; as well as many nieces, nephews, other extended relatives and many friends. Joani was preceded in death by her parents, Edwin and Leona Dopheide; her brother, Ronald Dopheide; and her parents-in-law, Bernard and Lucille Greving.

Joan Alma Greving, age 62, of Willey, passed away on Saturday, November 5, 2016 at her home surrounded by her family, after a courageous battle with cancer. Mass of the Christian Burial will be celebrated at 10:30 a.m. on Thursday, November... View Obituary & Service Information

The family of Joani Greving created this Life Tributes page to make it easy to share your memories.

Joan Alma Greving, age 62, of Willey, passed away on Saturday,...

Send flowers to the Greving family.