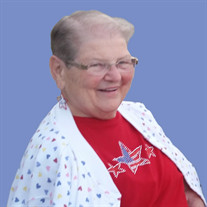 Joanell Koster, age 78, of Breda, died Friday, October 25, 2019 at Regency Park Nursing Home in Carroll. Mass of the Christian Burial will be celebrated at 10:30 a.m. Wednesday, October 30, 2019 at St. Bernard Catholic Church in Breda. The Celebrant will be Fr. Timothy Friedrichsen. Music will be by Marilyn Hundling and the St. Bernard’s Choir. Lector will be Eileen Lewis. Gift Bearers will be Emma Wiederien, Malia Wiederien, and Mava Lewis. Honorary Casket Bearers will be Kari Shields, Emily Koster, Abby Koster, Sharon White, Mary Mattox, Katie Koster, and Krista Wiederien. Casket Bearers will be Kyle Koster, Mike Lewis, Kevin Lewis, Brian Koster, Matt Koster, Derik Koster, Zach Koster, and Josh Wiederien. Burial will be in the parish cemetery. The Breda American Legion Auxiliary, and the Antonian College of Nursing will form an honor guard for the funeral mass. Friends may call at St. Bernard’s Church in Breda after 4 p.m. on Tuesday. A rosary will be prayed at 5 p.m., and a Christian Wake Service will be held at 6:30p.m. Additional visitation will be held at the St. Bernard’s Church in Breda on Wednesday morning from 9:30-10:15 a.m. Funeral arrangements are under the guidance of the Sharp Funeral Home in Breda and online condolences may be left for Joanell’s family at www.sharpfuneral.com. Joanell, the daughter of Dr. A.A. and Mava (Bennett) Blum, was born on January 12, 1941 in Carroll, Iowa. She grew up in Wall Lake and attended Wall Lake High School. She enrolled at Antonian School of Nursing in Carroll, and earned her Licensed Practical Nurse Degree. On April 8, 1961 Joanell was united in marriage to Leroy Koster at St. Joseph’s Catholic Church in Wall Lake. The couple made their home west of Breda where the couple farmed, and she took care of the home. Beginning in 1980 she was employed at St. Bernard’s School as Head School Cook, and later held other cooking positions around the area. Joanell had a passion for cooking, winning a blue ribbon at the Iowa State Fair for her Cinnamon Rolls. Every holiday she was called on for her “sweet treats” by many families in the area. She was involved with the Breda American Legion Auxiliary, Rosary Makers where she made countless Rosaries, and St. Bernard’s Guild. Left to cherish Joanell’s memory are her children: Kevin Koster, and his wife Annette of Breda, Eileen Lewis and her husband Mark of Cambridge, Chris Koster and his wife Karen of Breda, Tim Koster, and his wife Shery of Silverhill, AL, and Nicky Wiederien and her husband Bob, of Ocean Springs, MS; her daughter-in-law: Lori Koster of Breda; 19 grandchildren; 18 great-grandchildren with 2 more on the way; 1 great-great grandchild; her siblings Mary Schroeder of Wall Lake, Lois Cave of Colorado Springs, CO; her brothers-in-law and sisters-in-law: Maria Blum of Wall Lake, Pat Blum of Birmingham, AL, Maxine (Marv) Heinrichs of Conroy, MN, Ruth (Clete) Heinrichs of Marshalltown, Roger Koster of Elkader, and Delores Koster of Carroll; as well as many nieces nephews and other extended relatives and friends. Joanell was preceded in death by her parents; husband Leroy on March 1, 2019, her son, Scott Koster in 2012, a son-in-law Ken Young; siblings: Richard “Doc” Blum, Robert “Bob” Blum, Francis (Roma Jean) Blum, and William (Betty) Blum. As well as her sisters-in-law and brothers-in-law, Jim Cave, Clayton Schroeder, William (Loretta) Koster, Velma (Robert) Blum, Doyle (Bernice) Koster, Walt (Viola) Koster, Kermit (Elsie) Koster, Don Koster, and Darlene Koster.

The family of Joanell Koster created this Life Tributes page to make it easy to share your memories.