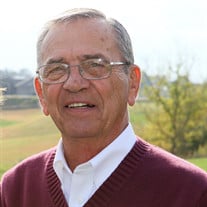 Jim Shymanski, age 80, of Carroll, died Thursday, February 14, 2019 at St. Anthony Regional Hospital in Carroll. Mass of the Christian Burial will be celebrated at 10:30 a.m. Tuesday, February 19, 2019 at St. John Paul II Parish – Holy Spirit Church in Carroll. The Celebrant will be Fr. Kevin Richter. Music will be by Dr. Franklyn Busby, Pastoral Musician, and the Holy Spirit Resurrection Choir. Lector will be Diane Shymanski. Gift Bearers will be Jim’s grandsons: Jeff Shymanski, Jake Denny, and Adam Denny. Eucharistic Minister will be Florence Oswald. Honorary Casket Bearers will be the Members of the Carroll Municipal Golf Course Men’s Senior League. Casket Bearers will be: Jim Vogele, Craig Denny, Paul Wiedemeier, Mark Wiedemeier, Terry Olsen, and Matt Swatzki. Friends may call at the Sharp Funeral Home in Carroll after 5 p.m. on Monday, where there will be a Carroll Knights of Columbus Rosary prayed at 6:30 p.m. The casket will be moved to Holy Spirit Church on Tuesday morning where additional visitation will be held from 9:30-10:15 a.m. Memorials may be left at the funeral home or at the church to be directed to St. Anthony Hospice, or Kuemper Catholic Schools Foundation. Funeral arrangements are under the direction of the Sharp Funeral Home in Carroll, and online condolences may be left for Jim’s family at www.sharpfuneral.com. Jim, the son of Leonard and Margaret (Schneckenberger) Shymanski was born on September 23, 1938 at St. Charles, Illinois. He grew up in Omaha, attended school at Sacred Heart Elementary, Creighton Preparatory, and graduated from Holy Name Catholic High School. After high school Jim enlisted in the United States Coast Guard. After his Honorable Discharge he returned to Omaha, and enrolled at I.B.M. Computer School. On October 7, 1961, Jim was united in marriage to Joan Mack in Omaha. The couple made their home in Omaha while Jim worked for Mutual of Omaha Insurance Company in the computer department. Jim then worked in sales for Keebler Company. While working for Keebler, Jim was transferred to Carroll. He continued to work for Keebler for a brief time before working for Crouse Cartage for eight years. In 1981 Jim became manager of the Carroll Municipal Golf Course. This was a job he thoroughly enjoyed. During his time as manager he oversaw the course expansion to the current 18-hole course today, a flourishing membership, and the beginning of the Men, Women, and Senior Golf Leagues. Jim retired from the Carroll Municipal Golf Course in 1996. After his retirement he and his wife Joan, owned and operated Denny’s Restaurant in Carroll until his full retirement in 2006. Customers patronizing his establishments were always warmly welcomed. Jim enjoyed the outdoors. He was an avid reader, golfer, hunter, and fisherman. He enjoyed playing many competitive card games, and telling his many jokes. Jim was an avid sports fan, including cheering on his treasured Nebraska Cornhuskers. Most of all he enjoyed his grandchildren, and attending as many of their events that he could. Jim was a member of Holy Spirit Church, and Men’s Club, the Carroll Knights of Columbus, and the Carroll Municipal Golf Course Senior League, serving as coordinator. Left to celebrate Jim’s life is his wife, Joan Shymanski of Carroll; children: Kathy (Jim Vogele) Shymanski of Portland, Oregon, John (Cindy) Shymanski of Carroll, and Amy (Craig) Denny of Council Bluffs; grandchildren: Jeff Shymanski, Jake Denny, and Adam Denny; his siblings: John (Diane) Shymanski of Omaha, Delores Swatzki of Thornton, CO; his brother-in-law: Lee (Eleanor) Mack of St. Louis, MO, and sister-in-law: Judy Mack of Laguna Beach, CA; as well as nieces, nephews, extended relatives, and numerous friends. Jim was preceded in death by his parents, Leonard and Margaret Shymanski; his sister Peg (Merle) Wiedemeier; brothers-in-law: Doug Mack, and Jack Swatzki; his father-in-law: Lee Mack; and his mother-in-law Fritzie (Howard) Ellis.

The family of Jim Shymanski created this Life Tributes page to make it easy to share your memories.

Send flowers to the Shymanski family.