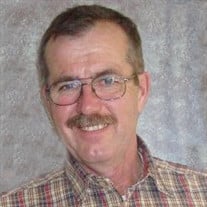 Jim “Buck” Bauer, age 62, of Lake City, died Thursday, May 04, 2017, at Stewart Memorial Hospital in Lake City, surrounded by his family after a courageous battle with cancer. Mass of the Christian Burial will be celebrated at 10 a.m. Monday, May 8, 2017 at St. Mary’s Catholic Church in Lake City. The Celebrant will be Fr. Lynn Bruch. Music will be by Diane Sommerfeld and Fran Lawson. Mass Servers will be Emily and Josh Henkenius. Lector will be Peggy Scanlan. Gift Bearers will be Jim’s grandchildren: Justin, Jace, and Jalee Bauer. Eucharistic Ministers will be Jim Henkenius, Luanne Redenius, and Gary Reicks. Casket Bearers will be Byron Petzenhauser, Gary Redenius, Paige Reiter, Bob Scanlan, Ted Janssen, and Jim Winkler. Burial will be at St. Mary’s Cemetery near Lake City. The Lake City Volunteer Fire Department will form an honor guard for the funeral mass. Friends may call at St. Mary’s Church in Lake City after 2 p.m. on Sunday, where there will be a Christian Wake Service held at 5 p.m. Visitation will resume at 9 a.m. Monday morning at St. Mary’s Church, and continue until the time of the funeral mass. Funeral arrangements are under the direction of the Sharp Funeral Home in Carroll, and online condolences may be left for Jim’s family at www.sharpfuneral.com. Born on April 22, 1955 in Carroll, Iowa, James was the son of Herman and Alita (Stangl) Bauer. He grew up on a farm near Dedham, and attended Willey-Dedham Schools. Jim then went on to graduate from Kuemper Catholic High School in 1973. On August 27, 1977, Jim was united in marriage to Judy Kerkhoff at Sacred Heart Church in Templeton, Iowa. Soon after their marriage Judy accepted a nursing position at Stewart Memorial Hospital in Lake City, and the couple made their home there. Buck worked for Wayne Nepple Plumbing and Heating in Carroll for several years before starting his own Bauer Plumbing in 1982, serving Lake City and the surrounding areas. He enjoyed his work and the friendships he developed because of it. A farmer without water was his priority. On the side, Jim loved going out to an acreage to take care of his cattle. His life was family- especially his grandchildren, his faith and work. He was proud of his 1965 Mustang and other classic cars that he had purchased throughout the years. Jim belonged to St. Mary's Parish in Lake City, the Knights of Columbus, and was a 25 year member of the Lake City Volunteer fire Department. Left to cherish Jim’s memory is his wife of over 39 years, Judy Bauer of Lake City; his son, Jason Bauer and his wife Jenah (Muhlbauer) and their children: Justin, Jace, and Jalee, with 1 more arriving soon. Also surviving are his siblings: Lois Beyerink of Roselle, Diane (Dan) Seidl of Coon Rapids, Kenny (Diane) Bauer of Arcadia, and Duane (Cindy) Bauer of Dedham; his sister-in-law: Judy (Clarence) Ziegman of Carroll; his brothers-in-law: Stan (Kathy) Kerkhoff of Carroll, and Dale (Joleen) Kerkhoff of Templeton; as well as many nieces, nephews, other extended relatives, and countless friends. Jim was preceded in death by his parents; son Jeremy Bauer on October 14, 2011, parents-in-law: Robert and Evelyn Kerkhoff; brothers: Marlin Bauer, and Dennis Bauer; and his brother-in-law: Ralph Beyerink.

Jim &#8220;Buck&#8221; Bauer, age 62, of Lake City, died Thursday, May 04, 2017, at Stewart Memorial Hospital in Lake City, surrounded by his family after a courageous battle with cancer. Mass of the Christian Burial will be celebrated at 10... View Obituary & Service Information

The family of Jim "Buck" Bauer created this Life Tributes page to make it easy to share your memories.

Send flowers to the Bauer family.