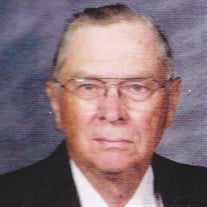 James (Jim) Leo Baumhover died June 8, 2020 at St. Anthony Regional Hospital in Carroll. He was 85 years old. Private Family Service will be held at the Sharp Funeral Home in Carroll at 11 a.m. Saturday June 13, 2020. Readers for the service will be Jim’s Grandchildren: Jill Christiansen and John Baumhover. Casket bearers will be Jim’s grandchildren: Mike Bayliss, Adam Baumhover, Kathryn Bauson, Matt Baumhover, Kyle Baumhover, and Jerry Philbin. The public is invited to attend the graveside service at 11:45 a.m. on Saturday at Our Lady of Mt. Carmel Cemetery in Mt. Carmel and are asked to abide by COVID 19 social distancing guidelines. A Live Stream Broadcast and recording of Jim’s service can be found by visiting the Sharp Funeral Home Carroll, Iowa YouTube Channel at this link: https://www.youtube.com/channel/UCqd2eeRJk5RTdEJoEooUoAQ. An Icon on that page will be available by 10:55 a.m. on Saturday. In lieu of flowers, memorials to the Carroll County Food Bank at 322 W 3rd St, Carroll, Iowa 51401 are preferred. Those wishing to mail their memorial may direct it to James Baumhover Family c/o Sharp Funeral Home, 226 W. 8th Street, Carroll, IA 51401. Funeral arrangements are under the guidance of the Sharp Funeral Home in Carroll, and online condolences may be left for Jim’s family at www.sharpfuneral.com. Jim was born on January 19, 1935 to Joseph and Nellie Baumhover on the family farm outside Mt Carmel, Iowa where he lived all but 3 years of his life. His siblings include: Winifred and Ray (deceased) Jorgensen, Jeanette (deceased) and Kenny Nees, Virgil and Mary Baumhover, Betty and Jerry Klocke, Lenore and Richard Fiedler, Anita and Francis Fiedler, Lorin and Lorraine Baumhover, and Roger and Mary (deceased) Baumhover. He graduated from Our Lady of Mt Carmel Catholic School in 1953 where he served as class president for several years. On October 11, 1955, Jim met the love of his life at a dance at the Arcadia Legion Hall. On April 27th, 1957 he married Marie Arlene Christensen at St Anne’s Catholic Church in Vail, Iowa. They made their home together on the family farm for the past 63 years and were blessed with 7 children. Jim and his family took many wonderful trips and especially loved road trips through Colorado’s National Parks. Later, he and Marie traveled whenever possible, most recently to Duluth, Canada, Alaska, Niagara Falls, and to visit relatives throughout the states. Jim was a farmer and steward of the land his entire life. He stood tall as a father, husband, neighbor, and friend, known for his sense of duty, honor, and moral character. His father passed away suddenly when Jim was just 19 when he took over the family farm. He never did anything half heartedly and became accomplished in every aspect of farming. If he couldn’t fix it, it couldn’t be fixed. Jim was nominated one of Carroll County’s Outstanding Young Farmers in 1963 and took 2nd place in the Kiwanis Club’s Soybean growers contest for 52.18 bushels per acre and was a Pioneer 60 Bushel Club member. He was president of Kuemper’s Parent’s Club from 1975 to 1976. Jim was awarded the Isaac Walton Conservation Award in 1988 for the windbreak he designed and planted at their farm. He was also elected to the Carroll County Community ASC Committee. Jim was a generous Red Cross donor attaining the 10 Gallon Donor Award. He was a 4H Leader and Judge and was an honorary life member of the Knights of Columbus. Jim’s entire life was closely entwined with Our Lady of. Mt Carmel Parish where he served as Eucharistic Minister (1974 to 2014), Lector, and Choir Member there for many years and was integral to many committees and projects in the church, school, and Mt Carmel community. Of all the things Jim enjoyed; playing cards, ice cream with pie, Old Milwaukee, Wheel of Fortune, restoring tractors remained at the top of the list. He and his son Dave farmed and repaired tractors together. International tractors (with a few other non-red colors thrown in) began to fill the sheds with beautiful vintage tractors, fully restored to original glory. Jim began to meet others who felt as he did and started the Midwest Old Iron Club in 2002 and enjoyed many years of tractor rides, club meetings, bus trips and hosted numerous events and shows. Jim is preceded in death by siblings Merle and Jerome Baumhover, and Jeanette Nees, parents Joseph and Nellie Baumhover and son Allan Baumhover. He is survived by wife Marie, daughter, Mary Jo (Mark) Bayliss, son, Patrick (Anne) Baumhover, daughter-in-law Tammy Baumhover, son Dale Baumhover, son Dave (Patty) Baumhover, daughter Eileen (Jerry) Philbin, and son Kevin Baumhover, sixteen grandchildren, and 3 great granddaughters.

The family of Jim Baumhover created this Life Tributes page to make it easy to share your memories.

Send flowers to the Baumhover family.