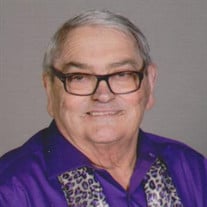 Jerry H. Bender, age 74, of Carroll, peacefully passed away on Monday, November 27, 2017 at St. Anthony Regional Hospital in Carroll. A Funeral Service will be held at 10:30 a.m. Friday, December 1, 2017 at St. John Evangelical Lutheran Church in Carroll. The Reverend Cindy Johnson will officiate, with Reverend Vic Johnson assisting with the funeral service. Music will be by Jan Potthoff, Wes Horn, and Leroy Moten. Readers will be Lisa Dreesman, and Peg Scheidt. Communion Servers will be John and Jackie Kitch. Casket Bearers will be Blake Bender, Nick Bender, David Beyerink, Ed Berger, Rex McClatchey, and Jim Briggs. Members of the St. Anthony Hospital Nursing Staff will form an honor guard for the funeral service. Military Honors will be conducted by the Carroll American Legion. Burial will be at 2 p.m. at the Violet Hill Cemetery in Perry, Iowa. Visitation will be held after 5 p.m. on Thursday at St. John Evangelical Lutheran Church in Carroll where there will be a Prayer Service at 6:30 p.m. Visitation will resume at the church at 9:30 a.m. on Friday, and continue until the time of the funeral service. Funeral arrangements are under the direction of the Sharp Funeral Home in Carroll, and online condolences may be left for Jerry’s family at www.sharpfuneral.com. Jerry was born on May 19, 1943 in Perry, Iowa. He is the son of Howard and Bernice (Merical) Bender. He graduated from Perry High School in 1961. After graduating, he served in the military for 12 years, until his honorable discharge. Jerry was united in marriage to Vickie Hancock on October 1, 1961 at Perry, Iowa. Jerry had a long career in law enforcement as a juvenile and adult probation officer. He was also a licensed private investigator. When he wasn’t working, he served on the Carroll Community School Board, and other numerous boards. Jerry was chosen to be in the first leadership institute class of 1992 to represent Carroll. In his free time, Jerry enjoyed challenges, and was a lifelong learner. He loved to read and share thoughts of wisdom with friends and family on social media, especially Facebook. Every day at 3 p.m. he could be found in his favorite chair watching Jeopardy. Jerry was an active church member at St. John Evangelical Lutheran Church. Jerry is survived by his wife, Vickie. They shared 56 years of marriage together. During their marriage they enjoyed traveling, spending time with friends and family, and taking care of their pets. Jerry and Vickie have two children: Deb (David) Beyerink of Carroll, and Doug (Doreen) Bender of Anthem, AZ. He leaves behind three grandchildren: Blake, Bianca, and Nick. He is also survived by his precious Miss Kitty, brothers-in-law, sisters-in-laws, nieces, nephews, and numerous friends and family. Jerry was preceded in death by his parents, and other family members.

The family of Jerry Bender created this Life Tributes page to make it easy to share your memories.

Jerry H. Bender, age 74, of Carroll, peacefully passed away on...

Send flowers to the Bender family.