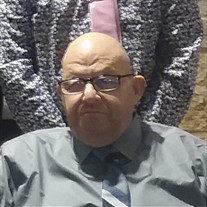 Jeff Meiners, 52 of Dedham, died Wednesday, December 25, 2019 at Iowa Methodist Medical Center in Des Moines, Iowa. Mass of the Christian Burial will be celebrated at 10:30 a.m., Monday, December 30, 2019 at St. Joseph's Catholic Church in Dedham. The Celebrant will be Fr. Patrick Behm, assisted by Jeff’s uncle, Deacon Louis Meiners. Music for the funeral mass will be by Cindy Bauer and the St. Joseph’s Choir. Lectors will be Tony Betts and Larry Meiners. Gift Bearers will be Delany Meyer, Chenoa Gradert, and Abby Warner. Casket Bearers will be: CJ Sondgeroth, Jerry Backus, Rod Hoffman, Steve Greteman, Jon Kitt, and Jerry Kitt. Friends may call at the Sharp Funeral Home in Carroll after 3 p.m. on Sunday where there will be a Christian Wake Service at 5 p.m. followed by a rosary. The casket will be moved to St. Joseph's Church on Monday morning where additional visitation will be held from 9:30-10:15 a.m. Funeral arrangements are under the guidance of the Sharp Funeral Home in Carroll and online condolences may be left for Jeff's family at www.sharpfuneral.com. Born on September 24, 1967 at Carroll, Iowa, Jeffery was the son on Norbert Herman and Janet Kay (Patrick) Meiners. Jeff graduated from Kuemper Catholic High School in 1987. Jeff and Jodi Lorraine Messinger had two children, KC Lynn Meiners and William “Will” Patrick Meiners. The couple lived in various locations before settling back in Dedham. They were married on June 19, 1999. For most of his working career Jeff was employed at Kitt’s Meat Processing in Dedham until his recent illness. He then worked for Home Care options assisted adults with disabilities until he was not able to work. Jeff was on the Carrol County Fair Board, Volunteer Fireman and First Responder, Boy Scout Leader, Guthrie County Pork Producers, St. Joseph’s Board of Directors, and was on the Dedham – Willey Softball Committee. Jeff and Jodi hosted two foreign exchange students from Hamburg, Germany; Jonas Kelp and Bendix Gessler. Jeff enjoyed watching his boys play ball, playing pitch, and coaching and playing softball. He loved the family trips to Branson and being on the beach with his family. Jeff was an avid Chicago Cubs fan, enjoyed play euchre, and having coffee with family and friends. Jeff is survived by his wife Jodi Meiners of Dedham; his sons: KC Meiners, Will Meiners, Jonas Kelp, and Bendix Gessler; his mother, Janet Meiners of Wahoo, NE; his siblings: Lisa Story and friend Randy Kruse of Sheldon, Lori Warner and friend John Lampe of Carroll and Scott (Walter) Meiners of Tampa, FL; his parents-in-law: David and Lorraine Messinger of Menlo; his brother-in-law and sister-in-law, Bill (Sarah) Messinger of Menlo; his nieces and nephews: Delaney (Nick) Meyer of Cedar Rapids, Chenoa (James) Gradert of Sibley, Abby Warner of Carroll, Drake Warner of Carroll, Cael Story of Sheldon, and Calhoun Messinger of Menlo; his great-niece, Taylah Meyer of Cedar Rapids; as well as aunts, uncles, other extended relatives and many friends. Jeff was preceded in death by his father, Norbert Meiners; and his grandparents: George and Matilda Meiners and Virgil and Oriel Patrick.

The family of Jeffery Meiners created this Life Tributes page to make it easy to share your memories.