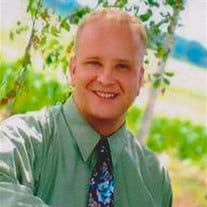 Jeff Grote, age 47, of Ankeny, formerly of Breda, died Friday, August 3, 2018 at his home in Ankeny. Mass of the Christian Burial will be celebrated at 10:30 a.m. Wednesday, August 8, 2018 at St. Bernard’s Catholic Church in Breda. The Celebrant will be Fr. Mark Stoll. Music will be by Marilyn Hundling, and the St. Bernard’s Choir. Lector will be Alvin Mueggenberg. Gift Bearers will be Jeff’s nieces, and nephews: Kylie Grote, Melissa Toney, Kelsey Wiese, Nathan Kult, and Jessie Grote. Eucharistic Ministers will be Leonard and Jean Grote, and Donna Grote. Casket bearers will be Doug Gerken, Bob Gerken, Bill Vonnahme, Jason Wernimont, Randy Lenz, Ron Lenz, and Brian Steinkamp. Burial will be at St. Bernard’s Cemetery in Breda. Friends may call at St. Bernard’s Church in Breda after 4 p.m. on Tuesday, where there will be a Rosary prayed at 5 p.m., and a Christian Wake Service will be held at 7 p.m. In lieu of flowers memorials may be left at the church to be made to St. Anthony Infusion Center in Carroll. Funeral arrangements are under the direction of the Sharp Funeral Home in Breda, and online condolences may be left for Jeff’s family at www.sharpfuneral.com. Jeffrey Michael, was born on October 26, 1970 in Carroll, Iowa, the son of Elmer and Lois (Neppl) Grote. He grew up on the family farm southwest of Breda, and attended grade school at St. Bernard’s School, before graduating from Kuemper Catholic High School in Carroll. After high school he enlisted in the Army National Guard, but health issues required Jeff to resign from his enlistment. Jeff held various positions in the area. While working he was constantly striving to make current items better, and innovate new designs. Jeff held multiple patents on anti-theft products for semi-tractors and other transportation. He enjoyed tinkering with anything mechanical, and he appreciated visiting with people and carrying on a long conversation, even if they were complete strangers. Survivors include his parents: Elmer and Lois Grote of rural Breda; his siblings: Deb (Keith) Kult of Coon Rapids, Dave (Toni) Grote of Arcadia, Russell Grote of Arcadia, and Janet (Tom) Grote-Knight of Bettendorf; his nieces, and nephews: Kylie Grote, Melissa (Darrin) Toney, Kelsey (Chance) Wiese, Nathan Kult, and Jessie Grote; his great-niece, and great-nephew: Adie Toney, and Wyatt Toney; as well as many friends, and other extended relatives. Jeff was preceded in death his brother, John Grote in infancy; his paternal grandparents, Herman and Louisa Grote; and maternal grandparents, Henry and Lena Neppl.

The family of Jeff Grote created this Life Tributes page to make it easy to share your memories.