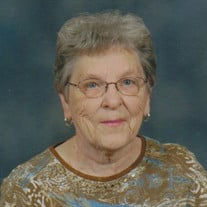 Jeanette Eischeid, 92 of Carroll and formerly of Halbur, died Monday, January 23, 2017 at St. Anthony Nursing Home in Carroll. Mass of the Christian Burial will be celebrated at 10 a.m. Friday, January 27, 2017 at Holy Spirit Catholic Church in Carroll. The Celebrant will be Fr. Timothy Johnson. Mass Servers will be Katie Eischeid, Alysa Flood, and Caleigh Flood. Music will be by Barb McDermott and the Holy Spirit Choir. Lector for the funeral mass will be Ben Sturm. Gift Bearers will be: Kristin Eischeid, Tess Sturm, and Caleb Flood. Eucharistic Minister will be Julie Eischeid. Honorary Casket Bearers will be Jeanette’s grandchildren. Casket Bearers will be: Neal Eischeid, Andy Eischeid, Lucas Eischeid, Travis Eischeid, Tyler Eischeid, Artie Eischeid, Joey Sturm and Jason Eischeid. Immediately following the mass the burial will take place at St. Augustine Cemetery in Halbur; with a luncheon to follow in the St. Augustine School Gymnasium. The Carroll Catholic Daughters of the Americas and the St. Anthony Hospital Auxiliary will form an honor guard for the funeral mass. Friends may call at the Sharp Funeral Home in Carroll after 4 p.m. on Thursday, where there will be a Carroll Catholic Daughters of the Americas Rosary at 5 p.m., and a Christian Wake Service at 7 p.m. The casket will be moved to Holy Spirit Church on Friday morning where visitation will resume at 9 a.m., and continue until the time of the funeral mass. Funeral arrangements are under the direction of the Sharp Funeral Home in Carroll, and online condolences may be left for Jeanette’s family at www.sharpfuneral.com. Born on July 30, 1924 at Templeton, Iowa, Jeanette was the daughter of Art and Loretta (Trecker) Hinners. She attended and later graduated from St. Angela’s Academy in Carroll. On July 30, 1947, Jeanette was united in marriage to Ted Eischeid Jr. at St. Augustine Catholic Church in Halbur. The couple made their home northeast of Halbur where she was a devoted homemaker while her husband was engaged in grain and livestock farming. Jeanette loved baking, cooking and hosting her entire family. Her favorite hobby was playing cards and she was involved with several bridge clubs. Jeanette was also very active in her church parishes and ladies guilds; both St. Augustine in Halbur and when she moved to Carroll, Holy Spirit Church. She was a member also of the Carroll Catholic Daughters of the Americas and volunteered with the St. Anthony Hospital Auxiliary. Jeanette is survived by her children: Michael Eischeid of Manilla, Bill Eischeid of Trenton, NJ, Barbara (Bob) Sturm of Halbur, Terry (Janice) Eischeid of Nocona, TX, Ted III (Julie) Eischeid of Halbur, Tim (Leslie) Eischeid of Halbur, and Lee Ann (Fitz) Flood of Carroll; 28 grandchildren; 22 great-grandchildren; her siblings: Marjorie (Ray) Hacker of Halbur, Dolores (Hank) Darveaux of Pipestone, MN, Donald (Lois) Hinners of Carroll, Arden (Judy) Hinners of Carroll, Larry (Della) Hinners of Manning, Richard (Helen) Hinners of Halbur, and Jack (Lois) Hinners of Halbur; her sisters-in-law: Irma Fast of Windom, MN, Marie Schreck of Carroll, Mary Eischeid of Spencer, Irene Eischeid of Carroll, and Darlene (Don) Riesberg of Halbur; as well as many nieces, nephews, and other extended relatives. Jeanette was preceded in death by her parents; her husband Ted Eischeid Jr. in 2006; her grandchildren: Dillon Eischeid and Lexie Grace Eischeid; her brother, Vernon Hinners; and her parents-in-law, Ted and Anna Eischeid.

The family of Jeanette Eischeid created this Life Tributes page to make it easy to share your memories.

Jeanette Eischeid, 92 of Carroll and formerly of Halbur, died...

Send flowers to the Eischeid family.