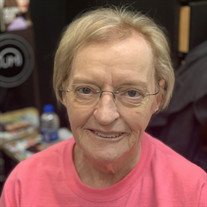 Jean Vonnahme, 68, of Carroll died Thursday evening, October 3, 2019 at her home in Carroll surrounded by family. Mass of the Christian Burial will be celebrated at 10:30 a.m., Tuesday, October 8, 2019 at St. John Paul II Parish – Holy Spirit Church in Carroll. The Celebrant will be Fr. Kevin Richter. Mass Servers will be: Jack Badding, Brock Badding and Fletch Badding. Music will be by Jake Gute. Lector for the Funeral Mass will be Karyn Sapp. Gift Bearers will be: Samantha Baumeister, Cody Baumeister, Derrie Vonnahme, Taye Vonnahme, Braxton Vonnahme, Avah Vonnahme, Scarlett Vonnahme, Bria Moeller and Kash Moeller. Eucharistic Ministers will be Joni Badding, Tamie Badding and Joan Kerwood. Casket Bearers will be: Kevin Forke, Brian Forke, Shawn Schaefer, Brad Vonnahme, Bruce Baumeister, and Ron Wittrock. Burial will be in Mt. Olivet Cemetery in Carroll. Friends may call at the Sharp Funeral Home in Carroll after 4 p.m. on Monday where there will be a Christian Wake Service at 7 p.m. The casket will be moved to Holy Spirit Church on Tuesday morning where additional visitation will be held from 9:30 – 10:15 a.m. Funeral arrangements are under the guidance of the Sharp Funeral Home in Carroll and online condolences may be left for Jean’s family at www.sharpfuneral.com. Born on August 9, 1951 in Carroll, IA, Jean was the daughter of Vernice and Lila (Ricke) Forke. She spent her childhood in the Maple Park neighborhood in Carroll and graduated from Kuemper High School. On September 19, 1970, Jean married Robert Vonnahme at Holy Spirit Church in Carroll. Together they had three children, Shelby, Dana and Brandon. Jean worked from a young age, starting her career as a bookkeeper at Deluxe Cleaners and then with General Electric where she spent 22 years before their shutdown. Jean started working for Advantage One Credit Union which later was bought by Iowa Community Credit Union and then became Dupaco Community Credit Union where she later retired from. Jean loved working on her Sudoku books, watching soaps and game shows, and most of all spending time with her grand and great grandchildren. She was an avid supporter of all her grandkids and rarely missed any event they participated in. Jeans favorite times were when one, or even two, would climb up on her lap and let her hold them. She was sure to let everyone know how much she loved them. Jean is survived by her husband Robert Vonnahme of Carroll, her daughters Shelby Baumeister (Sean Drumheller) of Carroll, Dana (Matt) Collison of Carroll and a son, Brandon (Teresa) Vonnahme of Carroll; eleven grandchildren: Samantha Baumeister (Eddie Vogl), Cody Baumeister, Derrie Vonnahme, Taye, Braxton, Avah, Scarlett Vonnahme, Savannah, Spencer Sullivan and Seth Drumheller; two great grandchildren: Bria Moeller and Kash Moeller; her siblings: Veda (Norman) Stougard of Des Moines, Lynn (Sandy) Forke of Carroll, Joan (Bill) Anderson of Des Moines, Gary (Kath) Forke of Carroll, and Vern (Shannon) Forke of Onawa; her sisters-in law and brothers-in-law: Peggy Forke of Carroll, Marcella Patton of Carroll, Randy (Darlene) Vonnahme of Wall Lake, Ron (Mary) Vonnahme of Carroll, Mary (Kevin) Hike of Lake City, Marilyn Miller of Fonda, Marge (Todd) Mumm of Westside, and Richard (Leslie) Vonnahme of Carroll. Jean was preceded in death by her parents Vernice and Lila (Ricke) Forke, her parents-in-law Martin and Juanita (Kuker) Vonnahme, three brothers, Dale, Lyle and Glen and brother-in-law Floyd Patton.

The family of Jean Vonnahme created this Life Tributes page to make it easy to share your memories.

Send flowers to the Vonnahme family.