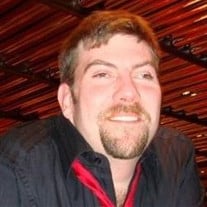 Jason Daniel Julich, died unexpectedly on December 8, 2016 at his home in Carroll, at the age of 40. Funeral services will be held at 2 p.m., Monday, December 19, 2016 at the Sharp Funeral Home in Carroll. Officiating will be Fr. Timothy Johnson. Burial will be at 2 p.m. Wednesday in Our Lady of Mt. Carmel Cemetery. Visitation will begin at 1 p.m. on Monday at the funeral home and will continue until time of the funeral service. Funeral arrangements are under the direction of the Sharp Funeral Home in Carroll and online condolences may be left for Jason’s family at www.sharpfuneral.com. Jason was born on August 21, 1976 in Carroll, Iowa, the son of Daniel and Joan (Mayer) Julich. He graduated from Carroll High in 1995. In 1999, he had his first child, Erynn Nicole Julich. In 2001 he had his second child, Tyler Daniel Julich and married his love, Shannon Hogue (now Bradley), in 2002. Jason’s children changed his life and were his pride and joy. While living with his children and ex-wife, Jason last worked at Monogram Foods in Harlan, IA. Jason enjoyed sports (all sports even the Olympics). He loved music, movies, and playing cards. However, Jason loved his friends and family the most. He will be remembered most for his jovialness and his ability to bring fun and happiness to any event. Jason is survived by his daughter, Erynn Julich; his son, Tyler Julich, both of Harlan; his father Daniel Julich of Carroll; his mother, Joan (Terry) Hermsen of Florida; his brother, Jeffery Julich of Dallas, TX; his sister, Jennifer (Will) Julich-Hildreth of Des Moines; his grandmother, Lucille Julich of Carroll; as well as several aunts, uncles, and other extended relatives. He is preceded in death by his paternal grandfather, Julian Julich, and his maternal grandmother and grandfather, Eleanor and Frank Mayer.

Jason Daniel Julich, died unexpectedly on December 8, 2016 at his home in Carroll, at the age of 40. Funeral services will be held at 2 p.m., Monday, December 19, 2016 at the Sharp Funeral Home in Carroll. Officiating will be Fr. Timothy Johnson.... View Obituary & Service Information

The family of Jason Julich created this Life Tributes page to make it easy to share your memories.

Send flowers to the Julich family.