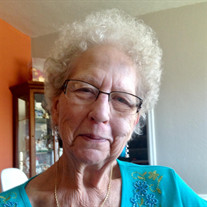 Janet (Sapp) Parent, 80 of Chicago, Illinois and formerly of Carroll, died Wednesday, June 27, 2018 at Palos Community Hospital in Palos Heights, Illinois. Mass of the Christian Burial will be celebrated at 10:30 a.m., Monday, July 2, 2018 at St. Lawrence Catholic Church in Carroll. The Celebrant will be Fr. Timothy Schott. Music will be by Marcy Anderson, Steve Anderson and the St. Lawrence Choir. Mass Server will be Alex Henkle. Lectors will be Michelle Lawton, and Laura Steimer. Gift Bearers will be Dan Parent and Kelly Parent. Eucharistic Ministers will be Cindy Boyd, and Connie Sapp. Casket Bearers will be Jon Parent, Dan Parent, Kelly Parent, Rick Sapp, Steve Sapp, and Steve Olberding. Burial will be in Mt. Olivet Cemetery in Carroll. Visitation will be held on Monday at St. Lawrence Church from 9:30-10:15 a.m. Funeral arrangements are under the direction of the Sharp Funeral Home in Carroll and online condolences may be left for Janet’s family at www.sharpfuneral.com. Janet was born on May 18, 1938, the daughter of Jelste “J.J.” and Marie (Feld) Sapp. She was raised with her seven brothers and sisters in Carroll, Iowa where she loved farming on grandma Feld’s farm. She went to college at De Paul University in Chicago, Illinois, where she obtained her Master’s Degree in education. She worked as a guidance counselor at Carl Sandburg High School for 35 years before retiring in 2003. She loved helping her "kids" at the school and being a great coworker and friend to anyone in need. Loving mother to Jon and grandma to Dan and Kelly. Her passion was her grandchildren but she also loved quilting and gardening. She could never plant enough flowers! Janet is survived by her son, Jon Parent and his wife Kendall of New Lenox, IL; her grandchildren: Dan Parent and Kelly Parent; her sisters: Mary Steimer of Omaha and Judy Testroet of Carroll; as well as many nieces, nephews, and other extended relatives. Janet was preceded in death by her parents; her siblings: Ruth (Merle) Olberding, Richard (Judy) Sapp, Ray (Doris) Sapp, Robert (Dorothy) Sapp, and Linda (Jerry) Schafer; and her brothers-in-law, Glenn Steimer and Paul Testroet.

The family of Janet (Sapp) Parent created this Life Tributes page to make it easy to share your memories.

Janet (Sapp) Parent, 80 of Chicago, Illinois and formerly of...