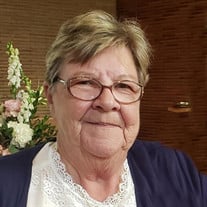 Janet Meiners, 77, formerly of Dedham, died early Monday morning, March 15, 2021 at Regency Park Nursing Home in Carroll. Funeral services will be held at 3 p.m., Saturday, March 20, 2021 at the Sharp Funeral Home in Carroll. Officiating will be Deacon Louis Meiners. Lectors will be Tony Betts and Dawnella Thilliander. Visitation will begin at 1 p.m. and continue until time of services. Those in attendance are required to wear a face covering and abide by current social distancing guidelines. A livestream of Janet's funeral will be available on the Sharp Funeral Home – Carroll YouTube Page at the following link: https://youtu.be/JqIE85Td-Ws Memorials may be left at the funeral home for Janet’s family for a later designation. Funeral arrangements are under the guidance of the Sharp Funeral Home in Carroll and online condolences may be left for Janet’s family at www.sharpfuneral.com. Born on March 2, 1944 in Carroll, Iowa, Janet was the daughter of Virgil and Orriel (Myers) Patrick. She grew up in rural Coon Rapids; attending country school and later graduated from Coon Rapids High School in 1962. On August 28, 1965, Janet was united in marriage to Norbert Meiners at St. Joseph’s Catholic Church in Dedham. The couple made their home in Dedham where she was a devoted homemaker and later received her nursing degree from DMACC. Janet was then employed at Manning Regional Healthcare Center. In 1988, Janet and Norbert moved to Thomasville, Georgia. While in Georgia, she continued her nursing profession with Mental Health and with Drug and Alcohol Rehabilitation. Janet enjoyed reading, going to the beach, lunch dates with the Yayas, and her travels to Hawaii and Branson, Missouri. She was an avid collector of lighthouses and shells and could often be found sitting on her porch enjoying a cup of coffee. A Saturday night tradition was watching Grand Ole Opry while snacking on popcorn and enjoying a Diet Pepsi. Janet was a member of St. Joseph’s Catholic Church in Dedham, St. Augustine Catholic Church in Georgia, and a member of the Dedham American Legion Auxiliary. Survivors include her children: Lisa Story (Randy Kruse) of Sheldon, Lori Warner of Carroll, and Scott Meiners (Walter Meseda) of Tampa, FL; her daughter-in-law, Jodi Meiners of Carroll; her grandchildren: Delaney and Nick Meyer of Cedar Rapids, Chenoa and James Gradert of Sibley, Drake and Abby Warner of Carroll, KC and Will Meiners of Carroll, and Cael Story of Sheldon; her great-grandchild, Taylah Rae Meyer of Cedar Rapids; her siblings: Larry (Mary Ellen) Patrick, and Sharon Betts; her sisters-in-law and brothers-in-law: Shirley Patrick, Mary Ann Olson, Delores McCort, Joann Humphries, Alberta Meiners, Louis Meiners, Mary Jane (John) Weber, Richard Meiners, Joyce Meiners, Daryl (Peggi) Meiners, and Emily Ogden; her special cousin, Linda Lehman; as well as other extended relatives and many friends. Janet was preceded in death by her parents; her husband Norbert; her son Jeff Meiners; her parents-in-law, George and Mathilda Meiners; and her siblings: Phil Patrick, Ronald Patrick, Barb Meiners, and Robert Dean Patrick in infancy.

The family of Janet Meiners created this Life Tributes page to make it easy to share your memories.