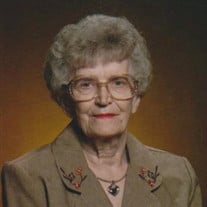 Janet Dethlefsen, 85 of Breda, died Friday, May 22, 2020 at her residence in Breda surrounded by her family. Due to COVID-19 restrictions, a private funeral service for immediate family only will be held at the Sharp Funeral Home in Breda on Wednesday, May 27, 2020. Officiating will be Fr. Timothy Friedrichsen. Casket Bearers will be Janet’s grandchildren. Burial will be in St. Bernard’s Cemetery in Breda. A Live Stream Broadcast and recording of Janet’s service can be found by visiting the Sharp Funeral Home Carroll, Iowa YouTube Channel at this link: https://www.youtube.com/channel/UCqd2eeRJk5RTdEJoEooUoAQ. An Icon on that page will be available by 10:55 a.m. on Wednesday. Funeral arrangements are under the guidance of the Sharp Funeral Home in Breda and online condolences may be left for Janet’s family at www.sharpfuneral.com. Memorials may be left for the Janet Dethlefsen family, c/o Sharp Funeral Home, 226 W. 8th St. Carroll, IA, 51401. Janet was born on October 26, 1934, in Carroll, Iowa, a daughter of Walter and Julianna (Polking) Fee. Janet grew up in Breda and graduated from St. Bernard High School in 1953. Janet worked as a nurse’s aide prior to becoming a loving mother to 4 children. She then spent her next many years as a stay at home mom raising them. Janet enjoyed going for drives, sharing a glass of wine, socializing with family and friends. She especially enjoyed the trips she was able to take with her siblings. Janet is survived by her children: Debbie Renze of Carroll, Diane (Ken) Vonnahme of Mt Carmel, Mark (Irene) Dethlefsen of Bellevue NE, and Jackie Dethlefsen of Breda; her grandchildren: Jason, Josh, and Jeremy, Renze, Jenny Vonnahme, Cari, Tanner (Jez), and Rachel Vonnahme, Tiffany (Brad) Meisinger, and Daniel Dethlefsen; 9 great grandchildren. Her siblings; Phil (Wilma) Fee of Santa Maria California, Paul (Penny) Fee of Sioux City, Virginia (Dale) Schweers of Arcadia, Bruce (Deb) Fee of Charlotte, N.C. She is preceded in death by her parents: Walter and Julianna Fee and her sisters-in-law Lettie Fee and Janet Fee.

Janet Dethlefsen, 85 of Breda, died Friday, May 22, 2020 at her residence in Breda surrounded by her family. Due to COVID-19 restrictions, a private funeral service for immediate family only will be held at the Sharp Funeral Home in Breda on... View Obituary & Service Information

The family of Janet Dethlefsen created this Life Tributes page to make it easy to share your memories.

Send flowers to the Dethlefsen family.