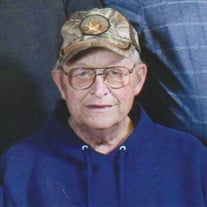 James Wolterman, age 65, of Lake City, formerly of Carroll, died Sunday, February 26, 2017 at his home in Lake City surrounded by his family. A funeral service will be held at 10:30 a.m. Wednesday, March 1, 2017 at the Sharp Funeral Home in Carroll. Pastor David Loeschen of Our Savior Lutheran Church in Denison will officiate. Burial will be at the Carroll City Cemetery with military honors conducted by the Carroll American Legion. Visitation will be held from 5-7 p.m. on Tuesday at the Sharp Funeral Home in Carroll, and will resume at 9:30 a.m. on Wednesday. Funeral arrangements are under the direction of the Sharp Funeral Home in Carroll, and online condolences may be left for James’ family at www.sharpfuneral.com. James William Wolterman was born on August 31, 1951 at Carroll, Iowa, he was the son of Wilbur and Helen (Becker) Wolterman. He grew up in Carroll, and graduated from Kuemper Catholic with the class of 1970. After his schooling, James worked for a brief time with Crouse Cartage in Carroll before he enlisted in the United States Army. After his honorable discharge, James returned to Carroll, and Crouse Cartage where he worked as a diesel mechanic for 31 years. James later worked for the City of Carroll, as a groundskeeper at the Carroll Municipal Golf Course. James worshiped his grandkids, and cherished every moment he spent with them. He also enjoyed gardening, tinkering with items that needed repair, visiting with people, especially his relatives, and friends, and reading Harry Potter Books. James is survived by his son: Thomas (Morgan) Wolterman of Churdan; five grandchildren: Cameron Wolterman, Carissa Murdock, Carter Murdock, Jakob Wolterman, and Patrik Wolterman; his siblings: Marge Wolterman of Lake City, Dale (Tina) Wolterman of Carroll, Gary (Lisa) Wolterman of Carroll, Debra (Pastor David) Loeschen of Denison, Cindy (Kevin) Cregeen of Creston, John Wolterman of Carroll, Pat (Bert) Madden of Carroll, Linda Culligan of Carroll, Larry (Mary Lou) Wolterman of Alaska, and Michael (Bonnie) Wolterman of Glidden; as well as many nieces, nephews, and other extended relatives. James was preceded in death by his parents; sons: Jerome Wolterman in 1975, and Christopher Wolterman in 1987; his brothers-in-law: Danny Fry, and Michael Culligan, and sister-in-law: Dee Wolterman.

James Wolterman, age 65, of Lake City, formerly of Carroll, died Sunday, February 26, 2017 at his home in Lake City surrounded by his family. A funeral service will be held at 10:30 a.m. Wednesday, March 1, 2017 at the Sharp Funeral Home... View Obituary & Service Information

The family of James W. Wolterman created this Life Tributes page to make it easy to share your memories.

Send flowers to the Wolterman family.