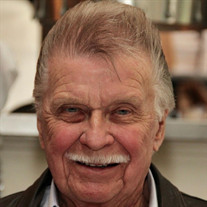 On March 16, 2019, James Anthony Polking, loving father, brother and grandfather, passed away peacefully at the Iowa Veteran’s Home in Marshalltown, Iowa. He was 87 years old. Known by most as Jim, and frequently answering to Jimmy and Jimbo, he grew up on the Century farm his grandfather established in 1874, located two-and one-half miles southwest of Breda, Iowa. The second oldest of six children, Jim cherished his memories of life on the farm, except for the daily chore of milking the cows. He treasured the values he learned from his parents and the farm life and passed them on to his children. Jim married Audrey Schieffer in 1952 and shortly thereafter began his tour of duty with the United States Army. He served as a Communications Chief in South Korea until September of 1954. Jim, along with 10 other men from Carroll County, were inducted into the Army on the same day and all returned from Korea on the same ship. One of Jim’s first paying jobs off the farm was as a truck driver. He learned that he loved life on the road. He developed a lifelong career in direct sales, including a stint as an auctioneer, marketing everything from accordions to encyclopedias to insurance to vacuum cleaners and, finally, pre-need funerals, his favorite of all. Jim was a gifted storyteller with a wicked sense of humor and a remarkable memory for details, especially from the past. Without missing a beat, he could tell you exactly how many inches of snow fell in January of 1936. Jim is reunited with his parents Clem and Anna; his dear sister, Phyllis Mae; and brothers, Bill and Joe. Jim is lovingly remembered and missed by his family: brothers John Polking (Stevie Coppin), Paul Polking (Joan), sister-in-law Peggy Polking, widow of brother Bill, and sister-in-law Lynn Strickland, widow of brother Joe; children Dan Polking (Chris), Terri Hale (John), Dave Polking and Barbara Pruitt (Don); grandchildren Tiffinni Berggren (Joe Salvaggi), Nicholas Shell (Nickie), Daniel Polking Jr., Rebecca Shell, Wesley Powell and Hannah Shell; great grandchildren AmayaLynn Starr, Owyn, Tayven, Weston and Nikolai and many nieces, nephews and friends. A funeral mass to celebrate Jim’s life, and his brother Joe Polking, who passed away on June 8, 2018, will be held at 10:30 a.m., Thursday, May 30, 2019 at St. Bernard’s Catholic Church in Breda. Burial will be in St. Bernard’s Cemetery in Breda with military honors conducted by the Breda American Legion. Visitation will begin at St. Bernard’s Church in Breda after 5 p.m. on Wednesday, May 29, 2019 with a Christian Wake Service at 7 p.m. Additional visitation will be held one hour prior to services on Thursday at the church. Following the burial at St. Bernard’s Cemetery please join the Polking families at the Breda American Legion Hall for a luncheon. Funeral arrangements are under the direction of the Sharp Funeral Home in Breda and online condolences may be left for the Polking families at www.sharpfuneral.com. For those wishing to provide memorials, the family suggests the Iowa Veteran’s Home, 1301 Summit St, Marshalltown, IA 50158, in Jim’s name and the Animal Rescue League Iowa, Inc., Attn: Donations, 5452 NE 22nd Street, Des Moines, IA 50313-2528, in Joe’s name.

On March 16, 2019, James Anthony Polking, loving father, brother and grandfather, passed away peacefully at the Iowa Veteran&#8217;s Home in Marshalltown, Iowa. He was 87 years old. Known by most as Jim, and frequently answering to Jimmy and... View Obituary & Service Information

The family of James Polking created this Life Tributes page to make it easy to share your memories.

Send flowers to the Polking family.