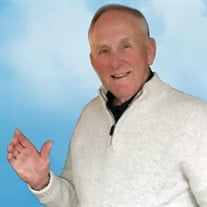 Jim Heinrichs, 84 of Carroll, died Friday, June 22, 2018 at Mercy Medical Center in Des Moines, Iowa. Mass of the Christian Burial will be celebrated at 10 a.m. Wednesday, June 27, 2018 at Holy Spirit Catholic Church in Carroll. The Celebrant will be Fr. Kevin Richter. Con-Celebrant and homilist will be Fr. Timothy Johnson. Music will be by Marcy Anderson as pianist with Sherry Loughran as cantor. Mass Servers will be Mitchell Badding and Carter Soppe. Lectors for the funeral mass will be Sandy Dryden and Joyce Hinners. Jackson Hinners and Nathan Dryden will present the offertory gifts. Eucharistic Ministers will be Jerry and Pat Heinrichs and Joni Badding. Casket Bearers will be Jim’s grandchildren: John Burns, James Burns, Annie Burns, Ryan Heinrichs, Jake Heinrichs, Cassie Heinrichs, Devan Heinrichs, Andy Heinrichs, Hudson Johns and Harper Johns. Burial will be in St. Augustine Cemetery in Halbur with military honors conducted by the Carroll American Legion. Friends may call at the Sharp Funeral Home in Carroll after 4 p.m. on Tuesday where there will be a rosary at 5 p.m. and a Christian Wake Service at 7 p.m. The casket will be moved to Holy Spirit Church on Wednesday morning where additional visitation will be held from 9-9:45 a.m. In lieu of flowers, Jim’s family requested memorials to Kuemper Catholic Schools Foundation. Funeral arrangements are under the direction of the Sharp Funeral Home in Carroll and online condolences may be left for Jim’s family at www.sharpfuneral.com. Born on May 24, 1934, near Halbur, Iowa, James was the son of Lawrence and Mary (Neppel) Heinrichs. Jim attended St. Augustine School and later graduated from Carroll High School. Following his schooling he served in the United States Army in Puerto Rico until his honorable discharge. Jim returned to the Carroll area and was united in marriage to Joleen Hinners on September 10, 1960 at St. Augustine Catholic Church in Halbur. Jim and Joleen made their home in Carroll where Jim was employed for over 40 years with Juergens Produce and Feed. Jim enjoyed fishing, hunting, golfing, and playing cards. He always loved the farm life, being outdoors and cutting wood. Jim liked to travel; especially for his fishing trips to Canada. His greatest joy was spending time with his family and friends. Jim was a member of Holy Spirit Church in Carroll where he was an active mass server. Left to celebrate his life is his wife of 57 years, Joleen Heinrichs of Carroll; his children: Mark Heinrichs of Reno, NV, Lori (Jack) Burns of Algona, Doug Heinrichs of Reno, NV, Kris (Sara) Heinrichs of Sleepy Eye, MN, Kurt Heinrichs of Reno, NV, Beth (Craig) Johns of Reno, NV, and Rachel Heinrichs of Des Moines; 10 grandchildren; his brother, Jerry (Pat) Heinrichs of Omaha, NE; his sisters-in-law and brothers-in-law: Sally Heinrichs of Carroll, Luanne Moeller of Carroll, Lois (Bob) Malvasio of Yorkville, IL, Marilyn (Bob) Baker of Powhatan, VA, Sandy Dryden of Midlothian, VA and Daryl (Joyce) Hinners of Carroll; as well as many nieces, nephews, other extended relatives and many friends. Jim was preceded in death by his parents; his brothers: Melvin Heinrichs, Eugene Heinrichs, LeRoy Heinrichs, and Bill Heinrichs; his sister in infancy, Anna Heinrichs; and his nephew, Mitchell Hinners.

The family of James Heinrichs created this Life Tributes page to make it easy to share your memories.